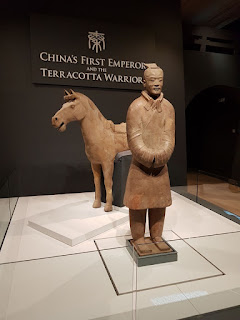 This exhibition, at Liverpool's World Museum, opened on 9th February and will run until 28th October. I visited it on 13th February and in my diary that night I wrote how impressed I'd been with the magnificent display.

There are so many historical facts about Qin Shi Huang's reign chronicled throughout the exhibition that it would be impossible for me to repeat them all here. China's First Emperor was only 13 years old when he came to power in 246BC, by the age of 22 he was in full control of the Government - and at 49 he was dead! It was a short life; filled with seemingly impossible achievements, and great cruelty. This post is a reflection of my journey through the exhibition.

As I visit Liverpool almost weekly, it was easy for me to buy my tickets in advance in the Museum's shop, but for those visiting from further afield booking on line is hassle-free. Because I was booking so early in the season, and because I was free during the week, I had plenty of choice when it came to picking a day and time. I timed my visit for 10.30am on a Tuesday morning. Although the slots are timed for every half hour, once you enter there is no restriction on how long you spend viewing the objects on display, although good manners should prompt you to make room for those coming behind you!

At the time I'd chosen, it took only minutes to be admitted to a small room, where a short film acts as an introduction. Showing wild horses, and battles between Warring States in a land of contrasts, it sets the scene for the exhibition. Like most people, I'd heard of the Terracotta Warriors and seen film and photographs of the site in China's city of Xi'an. I also know people who have travelled to China and seen them 'in situ', so I didn't know quite what to expect. Would we view them from a raised walkway with rows of Warriors lined up below us, a miniature version of the original site? No, that would have been an impossible  undertaking. Walking through the exhibition you soon realise what an achievement it was for Liverpool's World Museum to bring to the city just a sample of the 8,000 life-sized Warriors, discovered 2,200 years after Emperor Qin's death. There may not be a large number of them on display, but they are certainly impressive. 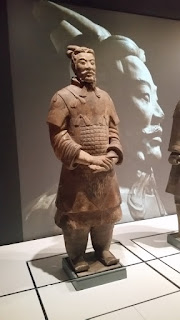 The average height of the Warriors is over 6ft tall - and as they are each standing on a small plinth, they seem rather bigger than life-sized to someone of 5'1"!

Walking through the exhibition, I found it difficult to comprehend the immense power of Emperor Qin, who was after all only a 13-year old boy when he became Emperor. How was he able commandeer a workforce of 700,000, from all corners of the Chinese Empire, who would work for the next 30 years creating a mausoleum guarded by a vast army of 8,000 terracotta soldiers, along with 40,000 bronze weapons, to protect him in the after-life? And it wasn't just soldiers, excavations some 2,200 years after the Emperor's death uncovered a terracotta stable boy buried with real horses - horses were a symbol of power, wealth and status - along with chariots to transport him through his Eternal Kingdom, with terracotta musicians, acrobats, and concubines to keep him amused and occupied. 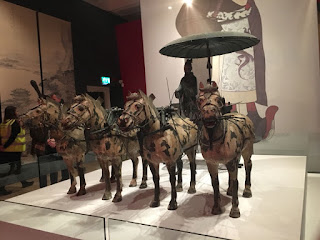 Interspersed throughout the exhibition are many treasures: a gold, duck-shaped belt buckle; spiritual representations of the seasons in bronze - a black turtle, a red bird, a green dragon, a white tiger. Far too many to list here, although one did stand out for me, resting on the top of a coffin was the sole of a shoe fashioned in jade - believed to protect the dead from evil spirits. Not only valuable treasure has been excavated, there are many examples of household objects, giving us an insight into ordinary life, including roof tiles, a horse-shaped pot and vessels for water and cooking.

It is hard to imagine how a man so occupied with his spiritual and physical well-being in the after-life could behave with such cruelty while he was alive. Was it in order to prove his absolute power that he had writers, philosophers and scholars executed - or was he at heart a frightened man, fearful of being challenged and losing his grip on his vast Kingdom? Ruling over it during his lifetime was not enough, he wanted to be immortal, to be in command of the whole universe even after death. In order to keep the tomb a secret, thousands of officials, servants, warriors and horses were killed,  and craftsmen were buried alive. On his death, those concubines who were childless were buried with him, perhaps to exclude the possibility of a challenge from an heir in the after-life! The sacrifice of human life on such a scale to satisfy the vanity of one man is beyond belief.

The most visually striking part of the exhibition comes towards the end when you enter a room and see seven huge warriors standing, or kneeling, side by side. This is where there may be a 'log-jam' of visitors as cameras and phones click away to capture the amazing image. However, on the day I visited, the guides were very efficient, giving visitors time to take in all the different details of the Warriors, photographing them from various angles, before gently encouraging people to move along. 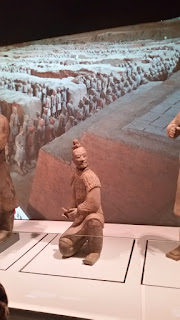 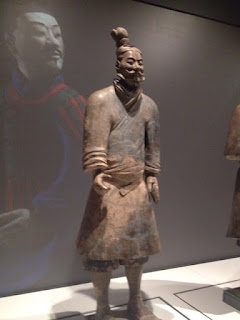 (I could say that I haven't included a photograph of all seven warriors so that I don't spoil the effect for those who have yet to visit the exhibition; sadly, the truth is that the one I downloaded, taken, as these were, by the friend who came with me - thank you Pauline - has disappeared from my laptop!)

The irony in Qin Shi Huang's story is that it was due to his fear of death that China's First Emperor died at the age of 49 from mercury poisoning, believing that the compound would grant him eternal life.

The Museum's website describes this exhibition as "...spanning almost 1,000 years of Chinese history; from the conflicts and chaos of the Warring States period to the achievements and legacy of the Qin and Han dynasties" and I can thoroughly recommend it. There is so much to see and to absorb that the one and a half hours I spent there passed far too quickly and I'm planning a second visit. I am confident that, by the end of the exhibition, the numbers of visitors, both local and from far afield, will break all attendance records at the Museum.