The 2018 Smithdown Litfest starts tomorrow - my tickets are booked and I'm looking forward to as interesting and varied programme as last year!

When the very first Smithdown Litfest was announced last year, one name immediately caught my attention. I'd tried to get tickets for a Phil Scraton talk at another event but despite my name being on a waiting list, I was unlucky - in 2017 I was determined I would be in the audience with my husband, Jim.

On the cover of Phil's updated edition of 'Hillsborough: The Truth', Andy Burnham, former MP, now Mayor of Manchester, writes:

"The full truth about Hillsborough would never have been known were it not for Phil Scraton's meticulous efforts over many years - he has done a huge service not just to the Hillsborough families but to this country".

I had a particular reason for wanting to hear Phil Scraton's talk. Along with so many thousands of people, the date April 15th, 1989 is burnt into my memory. Jim, and our youngest son, just 17, had set off for Leppings Lane in high spirits and at 3pm I settled down to see the match on TV with my mother-in-law. We watched the tragic events unfolding in disbelief, not knowing whether our loved ones were safe. No mobile phones in those days. It was very late that night before they arrived home, physically, although not emotionally, unscathed. In the days, months, years, decades, that followed, our anger grew as the lies, slurs, character assassination of football fans - and Liverpool people in general - were perpetuated and spread around the world. Sadly, my mother-in-law died long before the truth that we all knew, was finally brought to light.

The venue for Professor Scraton's talk was the Unitarian Church in Ullet Road, A Grade 1 listed building, and a most magnificent setting. Arriving early, we had time to explore the interior of the church and the cloister leading to the church hall. Whether you have religious beliefs or not, this building merits a visit - stained glass windows designed by Edward Burne-Jones, exquisite carvings, paintings, and marble memorials to famous Liverpool families including the Roscoes and Rathbones. 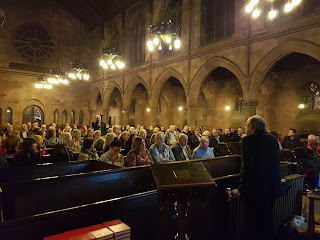 It seemed a particularly appropriate setting for Professor Scraton's talk, since one of Gerald Moira's allegorical paintings on the ceiling of the Library depicts The Triumph of Truth.

With two LFC season ticket holders in the family, the event with Howard Gayle was another not to be missed. This was held at the same venue and Howard was in conversation with R Lund Ansnes. Ms Ansnes is the author of five books on LFC, a journalist and broadcaster, but on this occasion the spotlight was on Liverpool FC's first black footballer and his newly released book, '61 Minutes in Munich', written in conjunction with Simon Hughes. Howard first appeared for Liverpool in October 1980 but was to wear the red shirt only five times, scoring one goal, his last game being in May, 1981. He is best remembered for his appearance in the 2nd leg of the European Cup semi-final at Bayern Munich when he was called from the substitutes bench to replace Kenny Dalglish - suffering from an injured ankle - and "ran the Bayern Munich defenders ragged", eventually being brought off after being repeatedly fouled. He was on the substitutes bench for the final in Paris and received a Cup Winners' Medal.

As well as talking about his footballing career - and the horrific racial abuse he suffered as a black player - Howard spoke about the difficulties of his early life in Toxteth and Norris Green when he was involved in a "world of petty criminality" and the difference football made to his life. His talk was a powerful mix of social history and autobiography, beginning with the history of slavery, through to Howard's own family's roots and ending in Dallas in 1986. The book is dedicated to his family and also begins with a quote from Nelson Mandela in 1995:


"For to be free is
not merely to cast off one's chains,
but to live in a way
that respects and enhances the
freedom of others." 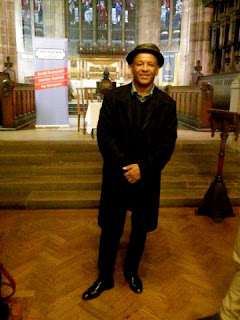 The audience were well looked after by the Reverend Philip Waldron and his team and after both events in the Unitarian Church we were able to speak to Professor Scraton and Howard Gayle, have books signed, mingle with other listeners, exchanging comments on what we'd heard - and enjoy a glass of wine!

Unfortunately, it wasn't possible for me to attend all the events on offer at the 2017 Smithdown Litfest, but I was delighted to be free on the Tuesday afternoon to hear June Francis, Family Saga author, talk about her life and her work. This event took place in the relaxed atmosphere of the Penny Lane Development Centre where again the audience were well looked after, although, it being 2 o'clock in the afternoon, we enjoyed tea or coffee rather than alcohol.

June Francis should have been born in Liverpool, but the local hospital had been bombed and her mother was evacuated to Blackpool for the birth, mother and baby returning to their home in Anfield soon after. June married in 1967 and with her new husband moved to Litherland where three sons were born. (I was interested to hear that she studied for her 'O' Level English Language at night school, as I'd taken 4 'O' levels at night school when my three sons were young, fulfilling a promise I'd made to my English teacher after leaving Grammar School early to start work in a city centre office.)

The driving force that set June on her very successful writing career was the opportunity to use the extra family income to pay school fees. She joined the Crosby Writers' Group and was also encouraged by the wife of the Vicar of her local church. She was in her forties when she took the first step, writing magazine articles. It took a year of submissions before she had one published in My Weekly. 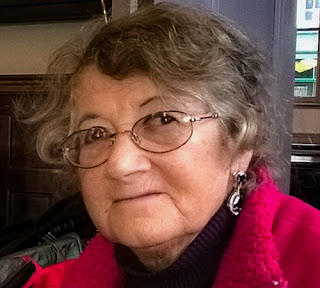 Following her magazine successes, June began submitting to Mills and Boon and after two years of re-writing, her historical romance 'The Bride Price' was published in 1987. More historical novels followed, but June's dream was to write family sagas set in her home town and her success in this genre was soon established. The titles of many of her novels are taken from songs from the era in which they're set: Memories are Made of This; It Had to Be You; and Love Letters in the Sand, titles which immediately set the scene.

Because June's novels are set in the city she knows and loves so well, the settings are realistic and whenever I walk up Mount Pleasant, past the hotels on the left-hand side, I remember 'A Mother's Duty', and the difficulties Kitty faces as a young widow with three sons, trying to run such a hotel.

I always enjoy talks by authors and June Francis's was particularly interesting. It was also good to see authors Lancashire-born Freda Lightfoot - Sunday Times Bestselling Author - and Annie Holland, writer of the delightful 'Stella the Stork' and 'All at Sea' children's books, present in the audience.

After enjoying some of the events at the 2017 Smithdown LitFest, I am very much looking forward to this year's programme. All events are free and many are already fully booked, but there may still be tickets available for: