A visit to the Victoria Gallery and Museum in Liverpool

I read a tweet from Liverpool’s Victoria Gallery and Museum advertising their free guided tours. This building was converted from the original University of Liverpool building in 2008 when the city was European Capital of Culture, and I realised that although I pass by on a fairly regular basis and always admire the architecture, I have never actually been inside. Time to ‘seize the day’, and explore this hidden gem. I call it a hidden gem because even though it stands in a prominent position at the junction of Brownlow Hill and Ashton Street, the trail most visitors to the city follow leads towards the waterfront via St George’s Hall, the World Museum, Art Gallery, etc. Yet the VG&M is only a ten minute walk from Lime Street Station, a bit of a climb, admittedly – the clue is in the name, ‘Brownlow Hill’! For those less able, or just to save time, you can catch a bus from the side of Adelphi Hotel which will drop you right outside the VG&M, they run every five minutes or so. And there are plenty of car parking provisions close by.

Arriving just before 12.30pm, the advertised time for the tour, we were soon joined by our guide, Barbara Marshall. We were a small group, five in all, which included a small boy who was not only very well behaved but also very bright. The tour takes approximately one hour and there is no need to pre-book, it’s a case of ‘first come, first served’. I’m not sure how many can be accommodated but I think we benefited from being a small group.

We began the tour outside the building, in Ashton Street, which is actually in the form of a square, so that Barbara could point out the different architectural styles of the University buildings. Architect Nikolaus Pevsner, likened the original University buildings to ‘a zoo’, not, I hasten to add, because of its students, but because the buildings represented ‘one of every species’, architecturally speaking.

The original Gothic Revival building in red Ruabon brick – the inspiration for the term ‘red brick universities’ – sits quite comfortably next to a 1913 building in classical style. Waterhouse must have had quite a quirky sense of humour because, as our guide pointed out, if you look up, above the Grecian pillars there are several sphinxes adorning the building!

Plans for a university in Liverpool were discussed at a town meeting in 1878. Manchester already had a university and there has always been a sense of rivalry between the two cities, with the merchants of Liverpool referring to, ‘Manchester Men, and Liverpool Gentlemen’!

The architect was to be Alfred Waterhouse, son of a wealthy Quaker mill owner from Aigburth. Alfred’s dream was to become an artist but his father advised him against it, saying there was more money to be made from a career in architecture. His advice turned out to be sound – Alfred became a prolific and popular architect, designing some 600 buildings in all, including eleven in Liverpool, Manchester’s Town Hall, and The Natural History Museum in London.

Money for the university was raised by public appeal with wealthy merchants, ship-owners and philanthropists donating large sums. Henry Tate (Tate & Lyle sugar) donated £20,000, with an extra £5,000 to provide books for the library. William Hartley (Hartley’s jam) donated £4,300 to provide the clock and bells for the tower. The original estimate for building was £35,000, but it eventually cost £53,000 – nothing changes! The University College of Liverpool was built near the site of a disused lunatic asylum and in 1882 opened its doors to 45 students. Twenty-one years later it became The University of Liverpool. Who could have foreseen that over a century later Liverpool would welcome tens of thousands of students from home and abroad to its colleges and universities? Although we were visiting during the summer vacation, evidence of student occupation was all around us, with cranes visible on the skyline as another huge accommodation block is being erected nearby.

The tour lasts one hour, and so provides only a ‘taster’ of everything on offer inside the building. The interior is a marvel of pillars and Moorish-influenced arches, tiled in the browns and greens favoured by the Victorians. The floors tiles are the original – mainly in the Roman mosaic design. A moment on the tour to pause and wonder how many feet had trod those tiles before us – what did they go on to achieve?

In what was the Women’s Reading Room there is an original fireplace, designed by a woman and also carved by a woman – the wife of a Professor at the university. The little boy accompanying us was quick to spot the various animals skilfully carved into the surround. A magnificent tiled fireplace still exists on the ground floor in what is now the Waterhouse Café.

The museum exhibits are housed in a mock-Tudor ‘Great Hall’; Waterhouse was obviously given free rein to indulge all his favourite architectural styles – but it works, because a wander through this building provides a surprise around every corner. There are permanent exhibits in glass cases in this room, but there is also a large exhibit which will, I think, change next year. This is a mock-up of a ‘dig’ in Turkey in the late 1800s, when archaeologists went to discover proof of the Hittites, previously thought to be a mythical biblical tribe. This must prove a very popular exhibit with children as there are opportunities to dress up, dig in sand to discover hidden treasures, etc. (For the times of specific events consult their website). I was particularly drawn to a photograph taken in 1913 by Lawrence of Arabia!

This building contains far too much of interest to do it justice here. There are sculptures; zoology and dentistry exhibits (including a complete dentist's surgery); paintings by Turner, Lucien Freud, JJ Audubon; icon paintings from Crete, Greece and Russia collected by Professor Roaf; Rembrandt etchings, and much more.

As a grandchild of Spanish immigrants, I was particularly interested in the exhibition by Kurt Tong, who explores his Chinese heritage through his own modern photographs, treasured family photographs and writing, which he began ‘as a visual storybook to share his roots with his daughters’. A visit to this gallery is concluded at certain times of the day by a Chinese tea ceremony! A wonderful experience hosted beautifully by volunteer Yeshan, who made and poured delicious Jasmine tea into tiny bowls that looked particularly delicate in my husband’s large hands. I’m told there may even be a photograph on the Gallery’s Facebook page!

Once our guide had left us, we wandered into the Quad, a peaceful (at least when we were there) outside space designed and built for the Queen’s Diamond Jubilee. From our seat in the centre we were able to gaze at the historic buildings, the Ashton, built for the Faculty of the Arts in 1913; the Harrison Hughes; the Johnston; the George Holt. Famous Liverpool men immortalised in brick and stone. I spotted a blue plaque on the Johnston building commemorating Sir Donald Ross (1857-1932), the discoverer of the transmission of malaria by mosquitos, who had worked in the building. I thought back to the tiled floor inside the VG&M – had we perhaps walked in his footsteps?

The inevitable conclusion to our trip was coffee and a chocolate muffin in the pleasant Waterhouse café, and as we wandered back down the hill to Lime Street Station, we vowed to come back soon and explore each room in detail.

Thank you to the receptionist who came running after me when I left my handbag on the sofa in Reception. Thank you Yeshan – I hope I’ve spelt your name correctly.

And finally, a big ‘thank you’ to Barbara for being such an enthusiastic and knowledgeable guide. I would recommend anyone visiting the building for the first time, to take a guided tour – without Barbara pointing it out would we have noticed that all the pillars are designed in contrasting pairs?
Posted by J Carmen Smith at 18:00 2 comments: 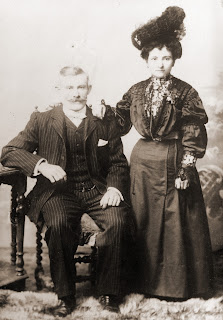 In a recent edition of the town and parish magazine, Your Berkhamsted, I read an article by Kate Perera, Singing in Santiago, which evoked my own thoughts of the city.

I made my own very special pilgrimage to Santiago de Compostela in the year 2000, researching my family tree. My maternal grandparents were from Galicia and I had been told that my grandmother left Santiago in the early 1900s after a double tragedy and settled in Liverpool, where she met my sea-farer grandfather and where my mother was born. I knew very little of my grandmother’s life in Spain except for anecdotes passed down through my mother – my grandfather had died before I was born and my grandmother didn’t speak English – so I went to Santiago with no information but a great deal of hope.

The Museo del Monasterio San Martin Pinario was crucial to my search. This magnificent building also houses the church archives for Santiago and it was here in June 2000 that I met the young priest – by an incredible coincidence also from Liverpool – who was to prove invaluable in my search for my roots.

Kate’s mention of the Hostal de los Reyes Católicos, also brought back memories. This is now a sumptuously and historically furnished parador, where my husband and I were lucky enough to spend one night a couple of years ago. In my grandmother’s day it was the hospital for Santiago, with its own chapel, and during our stay I was able to lay my hands on a physical piece of my family history. It still makes me weep to remember the story behind it.

And so to Santiago’s magnificent catedral; I remember the first time I traversed its wide aisles before climbing the steps behind the high altar to touch the statue of St James. I am not a Roman Catholic, unlike my ancestors, but during a pilgrim’s mass on that first visit I had the unforgettable sensation of a distinct link with the past. On a later visit, I was also lucky enough to be present on a holy day when the botafumeiro was swung; the one now in use is a replica as the original was stolen by Napoleon’s troops!

Kate’s article made me feel nostalgic; it has been two years since my last visit to Santiago and I must return soon. Since my first visit 13 years ago, I have unearthed more information about my grandmother and her – my – family than I ever thought possible. And it is only now that I fully understand what a brave woman she was. I hope she would have been pleased that I’ve visited her city; when I walk the streets she walked as a young girl I feel that I’m taking her home. I also hope she would be pleased that I’ve recently been interviewed about my search for my roots in the Galician newspaper La Voz de Galicia.