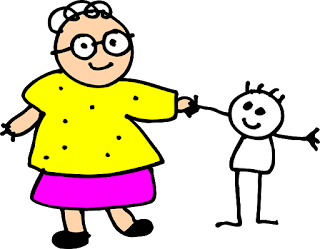 Browsing the racks of birthday and Christmas cards in shops we can see the variations of 'titles' given to grandmothers. I wonder if there are regional differences - is it only in Liverpool that they are called Nin? Though I have yet to see this on a card. None of my friends' grandchildren call them Grandmother; Grandma isn't unusual, although Nan, Nanny, or Nana are more common. Or maybe that's just in the north? I have known a couple of families where children called their grandparents Mother and Father, which always puzzled me. Both my grandfathers died before I was born so the question of what to call them never arose, and there are fewer variations on the card racks, most of them are to 'Grandad' - usually with only one 'd', rather than 'Granddad'.

When I was a child, most of my friends called their grandmothers Gran, or Granny.
I called my dad's mother 'Big Granny' - although she was probably only about 5'2" tall - because my mum's mother was only 4'9" and was therefore 'Little Granny'! My two grandmothers couldn't have been more different and inter-family relationships were never cordial. The two women, linked by the marriage of their son and daughter, never met. Neither attended the wedding, in Little Granny's case probably because it wasn't taking place in a Catholic church. I was told Big Granny didn't know her son was marrying 'a foreigner' and a Catholic at that, until after the register office ceremony when my dad took his new wife home to meet his mother!

Little Granny was a Spanish Catholic and didn't speak English despite living in Liverpool for almost fifty years. Having brought up three children in the city, I can only surmise that her lack of English was a conscious attempt to hang on to her Spanish identity. She died at the age of 71, when I was only ten years old. I have written extensively about her life in Spain and Liverpool in Chasing Shadows but have never put my memories of Big Granny down on paper, so perhaps it's time to redress the balance slightly. 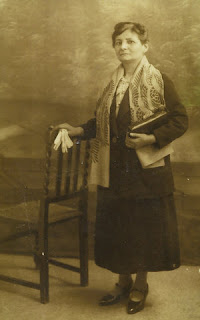 Big Granny was Welsh Chapel and lived to the ripe old age of 92, by which time I was in my early thirties and she was great-grandmother to my three children. She lived in a large, old house at the junction of two cobbled streets in Bootle, Merseyside. The front door opened onto a small, sooty garden, the side door onto a cobbled yard surrounded by a high brick wall, topped with the standard security measure of the time in that area - broken glass set in concrete! At the furthest corner of the yard stood the brick-built lavatory that was, quite literally, to prove the death of my grandmother in her 93rd year.

Big Granny's house was stuffed full of furniture and knick-knacks, the floors hidden beneath rag rugs made from long-forgotten garments, the walls covered with pictures, photographs and framed embroideries. As you entered the long, gloomy hall, with its high ceiling and dark walls, the first door on the left led into the front parlour. The door to this room was kept locked. It was the room where one of my aunts had died, aged 27, after contracting rheumatic fever - reputedly due to sleeping in cold, damp barns during her stint in the Land Army during World War II. Years later, when I was in my early teens and taking piano lessons, Granny would - on very rare occasions - unlock this door and give me permission to play the huge Canadian organ that stood against one wall. I was always left alone in the room, sitting on a high stool, feet barely able to reach to pump the pedals, trying to coax a wheezing tune from its depths. Conscious of the privilege I'd been granted, there was also the niggling awareness that somehow I was invading a hallowed space. I felt like apologising to the smiling woman in the black-edged photograph who looked down on me as I played.

It was the room next door - the kitchen - that was the hub of family life. Of course, the kitchen wasn't strictly a kitchen, despite the black-leaded range, since all the cooking and baking took place in the 'back-kitchen', or scullery. 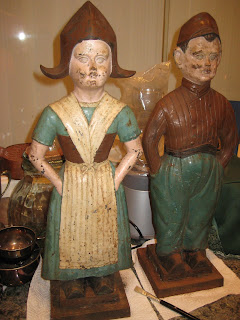 I was fascinated by these fire-dogs when I was a child.
Known in the family as 'the Dutch boy and girl', they stood
either side of the black-leaded range and
were rescued by a cousin and lovingly
restored before Big Granny's house was demolished.

My most vivid memory of the kitchen on my Sunday visits, is that it was nearly always full of men - Big Granny's sons, my dad amongst them - swapping yarns, smoking, drinking tea and eating home-made fruit loaf. I can still see Granny quite clearly, bustling around the room, cutting more bread, replenishing cups of tea, while joining in the banter - she looked like a story-book grandma, glasses perched on the end of her nose, her ample, 'cottage-loaf' figure topped by a bun of thick grey hair that, when I was a child, was still streaked with auburn.

None of the married sons brought their wives to these Sunday afternoon get-togethers. One son never married and still lived at home - an engagement came to a disappointing end while he was in the army during the war. An unmarried daughter also lived at home and a married daughter who lived next door would pop round - minus her husband - and the two sisters would try to make themselves heard above the general din. Often, someone was playing the piano, there was a piano in the kitchen as well as an organ in the parlour. The air was always thick with smoke, two uncles smoked pipes, the others - and my aunts - smoked cigarettes. With hindsight, it isn't surprising that they all died well before their allotted span, what is surprising is that sadly, Big Granny lived on long enough to see most of her children buried.

So, what was I doing during these visits, apart from my occasional forays into the front parlour? I don't remember my cousins, or my older siblings, being there at the same time as me. Was I the centre of attention then - with fond uncles and aunts patting me on the head, asking how I was doing at school, congratulating me on passing the 11-plus? Well, no. To all intents and purposes I was invisible. The old adage 'children should be seen and not heard' still held good in the 1940s/50s. Big Granny would absent-mindedly pass me a piece of fruit loaf from time to time and when I was leaving put a shilling in my hand and smile, as if a little surprised that I was still there. If I visited without my dad, when none of the uncles were there, the situation hardly changed. I still sat in silence, but in a quiet, dull room, listening to Big Granny's knitting needles clicking and clacking; my aunt wheezing as she lit yet another cigarette, while the tiny bird in the cuckoo clock ticked off each endless quarter-hour as it sprang out of its little door. 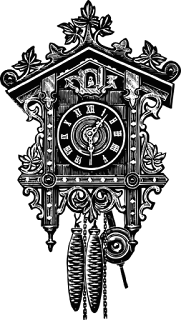 There was never a cuddle from Big Granny, even when I was little. Birthdays passed without notice, and sadly I have no idea whether she was fond of me or not. Even when the house was full, I felt more alone in the midst of this large, close-knit family than I ever was in my Spanish grandmother's house. For there, despite the language barrier, I knew I was loved.

It is only recently, having spent years researching my Spanish side of the family, that I have learned more about my Welsh grandmother's life. My father rarely spoke about his childhood and never mentioned his own grandparents. It wouldn't surprise me if I now know more about them than he did, especially my Welsh great-grandmother, who died before he was born. Did he know that she was married three times in three years? Mary was thirty when she married for the first time and she was widowed five months later. Within a couple of months she had remarried but was widowed again after only two years, left with a young son. Less than a year later she was already married to my great-grandfather - a widower with two young sons - and they had a daughter, my grandmother. Two more daughters and a son followed, but by the time my gran was sixteen, her mother had died aged only 49. 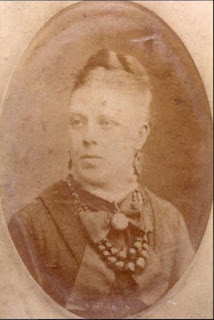 I never formed a close bond with Big Granny, I was fond of her, but she always seemed rather 'distant'; uncovering all this information about her family background has led me to think of her more sympathetically. I've yet to research how my great-grandmother died, whether she was ill for a long time, but eventually it must have fallen to my gran to bring up three younger siblings. Her brother was only four when their mother died and was still living with her at the time of the 1911 census, when he was 20 and she was married with three sons aged from four to seven. In all, Big Granny had twelve children, three of whom died in infancy, and by the time the grandchildren came along perhaps she'd had enough of kids!

Her long life came to an abrupt end, she didn't linger with a debilitating illness. It was November, bitterly cold, and the yard, and therefore the route to the outside 'lav' was frozen over. Granny slipped on the ice but picked herself up and didn't tell anyone. It was a couple of days later when a married daughter, who had come to stay because her sister was terminally ill in hospital, noticed that her mother was having difficulty dressing herself. Persuaded into admitting what had happened, the doctor was called and discovered she had a broken collar-bone. For the first time in her long life, Granny was admitted to hospital and 'slipped away' six hours later, just three weeks before her daughter died from lung cancer.

I don't have special Christmas memories of either of my grandmothers. I was never taken on outings or had my photograph taken with them, but perhaps that had more to do with the times we were living in. My own children, born in the 1960s/70s, loved, and were loved by, their grandparents and have many happy memories. Now Christmas 2018 has just passed and over the holiday period we've had fun with our own four lovely grandchildren, who call me 'Nanny'. Although they live a couple of hundred miles away, we spend as much time as possible with them, in our home and theirs, and on holiday. I hope that in years to come, when we're long gone, they will have happy memories of the times we've spent together, that they will know how much they were loved, and how precious they were to us.

That is the best legacy we can leave them.