It was a warm afternoon in August 2016 and Jim was catching the train to Lime Street, then the soccer bus to Anfield. I usually go with him on the train then spend the afternoon browsing Liverpool's shops, museums, etc, but I made a last minute decision to leave the train at Huyton and take a stroll around my childhood haunts. Huyton Station has been extended, there are extra platforms and extra subways to access them. As a very young child, the subway terrified me. It was simply a short, downward slope which then branched into two upward slopes, one leading to the Liverpool platform, the other to the platform for Prescot, St Helens and beyond. The problem was, if a train was passing  directly overhead when I was in the subway, I'd go rigid with terror and start screaming, unable to move until the thundering noise of the steam train had faded into the distance. A lifetime later, it's easy to see the reason. During the war, although we lived outside the city we still spent nights below ground in the air-raid shelter in our back garden, listening to the aeroplanes overhead and watching incendiary bombs lighting up the night sky. I had nightmares about that air-raid shelter for years afterwards.

Moving out of the area after my marriage, I still used this station to visit my parents and in-laws and it stayed much the same as I had always remembered it, although Huyton Village was already beginning to change. On my last visit, almost 20 years ago, it was no longer a village. The original council offices, with the children's playground behind, the library, the baby clinic, the essence of what had been a quiet country village, all had long gone.

Now, exiting the station - which wasn't as straightforward as I was expecting - I found it difficult to get my bearings. There used to be a solitary bus-stop, a few yards from the station, where you could catch the No.75 into Liverpool or to Pagemoss to visit my nan. It was in Poplar Bank, outside a former Approved School for Girls. As a child, I was always nervous waiting for that bus - what had the girls done, how long did they stay, and what happened to them when they left? Now, I think of the contrast between their lives and those of the girls who boarded at Huyton College, on the other side of the railway; daughters of well-to-do families. Soon after the end of the war, the College took in a small number of girls from local schools who'd done well in the 11-plus, their fees paid by the Council - but the cost of school dinners and the uniform was way beyond the means of working class families and what I guess was meant as a 'social experiment' wasn't repeated. On the site of the Approved School, which later was renamed a Community Home for Education there's now a bingo hall, and replacing that lone bus stop is a busy bus-station with a bewildering choice of bus routes to - at a guess - almost anywhere this side of the Mersey.

But my journey into the past would be on foot, starting with a walk down Derby Road, or what's left of it. 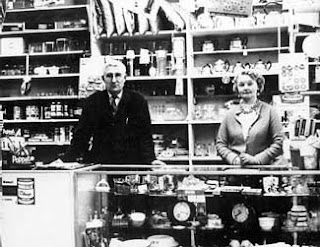 Brennand's shop has long gone - I can remember my dad taking me into Mr & Mrs Brennand's on my tenth birthday. A money box stood on the shop counter, collecting pennies for charity, I was so taken with it that my dad asked Mr Brennand if he could buy it for me. A ten-shilling note changed hands and I went home happily with my birthday present. I've still got it. 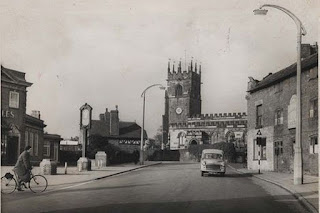 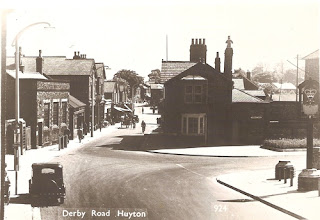 The top picture shows St Michael's Parish Church where I was a bridesmaid at my sister's wedding in 1957 and it's the one spot in Huyton Village that still looks exactly the same as it did then.

This is a much later view of the 'Village'. 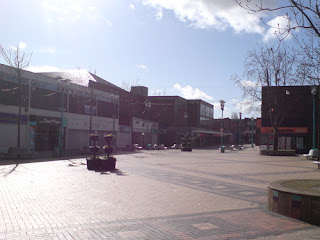 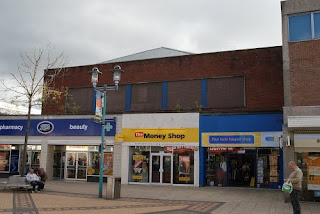 Hard to imagine that this is where the Mayfair Cinema once stood.

Turning into Huyton Hey Road, I passed Park Hall, which I remember as the Congregational Church. This is where my mum used to queue to renew the family's ration books, green for under-fives, entitling you to extra milk, and fruit if it came into the shops; blue for over-fives - also with an extra milk ration; and buff-coloured for adults. I can remember the air-raid siren sounding while we were queueing one day, and my mum dragging me along as fast as my short legs would carry me, making for the safety of our air-raid shelter. Fortunately, the all-clear sounded before I ran out of breath.

Continuing along Huyton Hey Road, I passed under the railway bridge, the road wider, and busier, than I remember it. St Agnes's Roman Catholic church is not the same building I regularly sneaked into with my best friend Pat, it has been replaced with a more modern structure. I say 'sneaked into' because as a non-Catholic I always felt slightly nervous in case the priest - or my dad - saw me and wanted to know what I was doing in there!

On the opposite corner to the church stands Huyton Hey Manor, a listed building known then simply as Manor Farm, which is now a nursing home. And the house that used to be the post office, run many years ago by a family called Bellis, still stands but is no longer a post office. I crossed the street to take a closer look and the GR post-box from my childhood is still there. One of my less pleasant memories is as an under-sized 11-year-old being pushed around by two robust sisters on this very spot, hair pulled, name calling, because I'd passed the 11-plus, and the younger sister had failed. I never did understand the meaning of 'college pudding' as an insult! 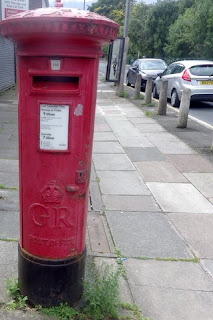 Continuing along Hall Lane, none of the shops I remember - Jack's Café, where Pat and I enjoyed the rare treat of a Cream Soda; the fish and chip shop with its two-pennyworth of chips and a six-penny fish, wrapped in newspaper; the sweet shop on the corner; Horace's greengrocery - have survived. But the Seel Arms pub is still there; and the Parish Rooms, where I joined the Brownies, still looks the same, as does St Gabriel's Church next to it, where I was married in 1960. 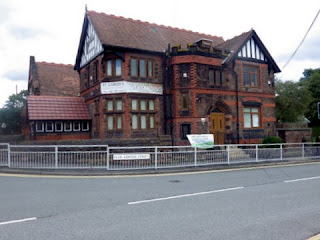 The slight incline in the road doesn't seem as steep as when I was a child. It was known as 'the brew', I've no idea why, and during the severe winter of 1947 the snow drifts were so deep I couldn't get to my primary school in St. Johns Road.

The road where I used to live has changed beyond recognition. There is a modern building on the corner where the dairy and its shippons used to be. Even as a child, there were no cows in the shippons, but they made great play spaces for me, Pat, and Brenda, the daughter of the family who owned the dairy. The Victorian terraces have long gone, replaced with modern semi-detached houses, but about half-way down the street there is  the terrace where I was brought up, 'two-up-two-down' houses built in the 1930s. Outside toilets, but running hot water, and a long back garden. As I walked past the ten houses I was amazed to see that 'ours', although modernised with a front porch and a rear extension, still has the low, brick front wall topped with iron railings, that my dad built so many years ago! The houses were rented from a private landlord but my dad kept it decorated and in good repair. Now, they're all privately owned.

The memories of all the families who lived in those ten houses during my childhood, and those I'd loved and lost, came flooding back as I retraced my steps towards Huyton Station.

But the temptation to take the long way round, down St John's Road, and along Tarbock Road was too great, despite the heat of the afternoon. I knew that my High School - Childwall Valley - had been demolished to make way for 'executive houses', would my Junior School have suffered the same fate? Past the house where we could buy crab-apples for a penny on our way home from school, carried in the skirt of our frock, the hem gathered up to form a bag. We usually got stomach-ache after stuffing ourselves, but it didn't stop us going back next time. Past new houses called Scholars' Fields, oh no, had they demolished my school? No - Huyton Sylvester County Primary is still there. There are more buildings where the air-raid shelters used to be, but the original building still stands, Girls Entrance on the left, Boys Entrance on the right, although we all played in the same playground and were in mixed classes. The playground looks smaller than when I was a child, although it's much better equipped. 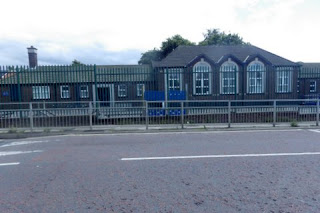 I was very happy in that school, I can remember the names of all my teachers, and Mr Welsby, the Headmaster, yet I can only remember one or two of my High School teachers. The school had a very modern approach for its time. We were given responsibility, such as answering Mr Welsby's phone if it rang while we were passing his study and he wasn't in. The teachers didn't comment on the fact that I was left-handed and never forced me to change to my right, even when it caused some confusion during sewing lessons! I'm glad the school is still there, I would love to go inside and see if it still has the original layout - the classrooms laid out in a square around a quadrangle. But no more time to stop and stare, I still had quite a walk ahead of me.

Turning right at the bottom of St Johns Road, I could see changes in the streets of terraced housing that ran off Tarbock Road, with new houses replacing some, but not all, of the original terraces. These were the streets where many of my junior school friends lived. I carried on towards The Rooley, looking for the dance school, located in a large old house called The Brooklands, where I met first met Jim. Dance schools were very popular in the late 1950s, Billy Martin's was also well-known. I know a lot of married couples who met in dance schools in the '50s/early '60s. In Brooklands we had two dance instructors and about an hour's tuition - ballroom dancing - before enjoying the rest of the evening showing off our new steps till it was time for the last waltz, always the Dream Weavers singing 'It's Almost Tomorrow' .

I don't know why I was surprised to find that the old, rambling house is no longer there - after all it's almost 60 years since I last visited it. In its place is a cul-de-sac of smart, modern houses, but I was pleased to see that they've retained a link to the past. 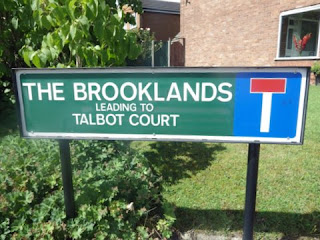 By now, I was weary and foot-sore and it was time to make my way back to Huyton Station. As I sat on the train home, my mind was a whirlwind of memories, emotions, and images of lost loved ones; parents, in-laws, Freda and John, our lovely next-door neighbours, Pat, my friend for 60 years - and all the people who passed in and out of my life through those years.

Most of the landscape of my early life has changed beyond recognition, but the memories remain vivid. It is unlikely I will re-visit these places but I don't regret taking a nostalgic stroll through my past.

[I am indebted to various websites for some of these photographs, if anyone needs a personal accreditation, please contact me.]