Out of the shadows - Part I

When we begin to research our family history, obtaining birth, marriage and death certificates is usually quite straightforward. Except of course if the side of the family you are interested in lived and died abroad. In this case, you need more than a little luck; for me it was a series of small miracles, as related in my book Chasing Shadows.

It is very exciting when you discover these certificates. I have amassed quite a collection over the 15 years I have been researching my Spanish roots. When my Spanish grandmother left her native Santiago de Compostela to settle in Liverpool in 1904, she left behind a large family, parents, siblings, grandparents, and because they lived out their lives in the heart of that historic city, untouched for centuries, it was possible to locate all the houses they lived in, the churches where they married and the cemeteries where they were laid to rest. This is not the case in Liverpool, where the bulldozers and the Blitz wiped out all traces of the Hispanic society that once existed in the city.

Obtaining these certificates fulfils your basic curiosity; they can reveal some family secrets - and tragedies. Other records are also useful, my Spanish grandfather's seaman's certificate reveals that he was 5'6" tall and had a tattoo on his left forearm, but they can't tell us what our ancestors were really like, the minutiae of their daily lives. What do we know of those who were neither rich, famous, nor infamous enough for their lives to be of interest to the general population? Is it ever possible to find out what kind of people they were? To my eternal gratitude, Kirsty Hooper, co-ordinator of the Hispanic Liverpool Project - http://www.warwick.ac.uk/hispanicliverpool - was able to unearth information about my family that gave me a window into their lives.

I first met Kirsty when she was head of Hispanic Studies at Liverpool University and I attended one of her lectures. We kept in touch and in December, 2014, I was delighted to be asked to speak at the Information Afternoon on Liverpool's Hispanic History, held in the Central Library. Earlier this month, I was invited to contribute to the Hispanic Liverpool Community Collection project, hosted by Fact. After so many years trying to trace a Liverpool/Spanish connection, through these projects I have been able to meet families from similar backgrounds to mine and compare notes. I spoke to people whose Spanish grandparents were neighbours of my Spanish grandparents. I learned of a tight-knit community of Hispanics whose men, like my grandfather, mostly worked for the Larrinaga Shipping Company, or kept the boarding houses where those who hadn't settled in Liverpool stayed when on shore. However, I never dreamt of discovering any facts about the social lives of my grandmother's family back in Spain, any letters that were exchanged having long since disappeared. Following the December meeting, I learned that Kirsty, very generously, and quite unknown to me at the time, had carried out a piece of research on my behalf. Accessing the archives of various Santiago newspapers for the period 1885 to 1945 she had unearthed information that would make my trip to Spain in March this year even more special than usual. 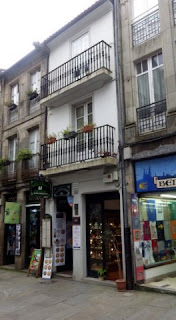 Various certificates had proved that my great-great-grandfather was a sombrerero, or hatter, but it was a different matter to see the report of an attempted break-in in 1883, 'at the business of the well-known hatter... by one of the nasty little thieves who currently thrive in this city...' In 1885, another newspaper had an advert for his shop, which gave the address. No longer a hat shop, it is now a cafe bar - El Paradiso - and we were able to lunch there each day, following my ancestor's footsteps over that threshold some 130 years later.

His son, my great-grandfather, must have been of some standing in the city for his return from 'America' - presumably Buenos Aires - to have been reported in January 1904, the same year that my grandmother emigrated to England. Another extract reports that Carmen, my great-aunt, was preparing for her first communion in July, 1920. On an earlier trip, I had visited the church where my great-aunt Maria was married in July 1925, but the newspaper report of her marriage, describing her 'natural charm and beauty highlighted by a delightful silk dress and the classic Spanish mantilla' brought the bare facts to life.

I have a photo of my great-grandparents. It shows a stern-looking couple, sitting well apart, who don't look particularly appealing, yet the detailed report of their Golden Wedding celebrations in the newspapaper El Compostelano on 24 December 1930 describes them as 'both beloved and appreciated by all the social classes of Santiago, as are their children...who have been able to create, by their assiduous labour, one of the most honest homes in Compostela'. It appears they were able to put the indiscretions of their youth behind them - their eldest daughter, my grandmother, was born three years before they married and their second child followed barely two months after their marriage! The obituary for my great-grandmother in El Compostelano on 7 April 1945 is fulsome in its praise, describing her as 'a kind-hearted person who enjoyed general admiration', and in her funeral cortege two days later 'were full representations of all the sectors of the city, showing plainly - albeit for such a sad reason - the general sympathy enjoyed by the deceased and her family'. A sad contrast to the funeral of her daughter in Liverpool less than five years later - buried in a pauper's grave far from the land of her birth.

All of these newspaper extracts have strengthened my connection to Santiago de Compostela, the city I've grown to love; there is also a sense of sadness that my grandmother lived out her life without this strong network of a well-respected family to help her through the bad times. But she wasn't the only one of my great-grandparents' children to cut themselves off from what appears to have been a comfortable life in Spain. And what did I discover about my great-grandfather the artist? Did the newspapers help in that search? More in Part 2...
Posted by J Carmen Smith at 17:38