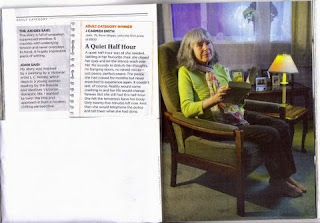 When Laura from Reader's Digest emailed me to arrange a photo shoot at my home for the beginning of March, informing me that their Art Director, Yvey, would accompany Chris, the photographer, I was puzzled. I had expected them to want a small photo of me to accompany the story, but an Art Director? I was even more puzzled when, a couple of days later, I received another email requesting photos of my living room. I began to get nervous - especially when it was followed by a request for a photo of my kitchen! Don't get me wrong, I love my home, we've lived in it for over 52 years, but it's 'comfortable', not glamorous. Were my home-making skills about to be judged as well as my writing? At the time, our two eldest granddaughters, aged 11 and 9, were staying with us and were given strict instructions that the living room was out of bounds, no scattered Lego etc, until Grandad had taken the requested photos and emailed them to Laura.

Having received the photos, Laura explained that Chris just needed to see how much daylight came into the house - our living room is fairly small but has a large window with curtains that draw right back to let in the maximum amount of light.

As the day for the shoot drew nearer, I became very nervous, Yvey and Chris were to arrive at 4pm on Monday, 2nd March, and would be with us for about two hours. What would they be like - would they be friendly - would we get on? Jim had already commented, 'I'll only be in the way, I'll make myself scarce'. In the event, far from being in the way, his furniture-shifting, curtain-hanging, etc, skills were in great demand!

It says a lot for Yvey and Chris's friendliness, as well as their professionalism, that within five minutes of their arrival, I felt relaxed and ready to enjoy the experience, although Yvey's remark that my living room looked 'pristine' didn't hold true for long as Chris staggered in with what seemed like a whole studio's worth of photography equipment. And Yvey unwrapped a pair of very large net curtains! Rather than a straightforward photograph, a scene was to be set to illustrate my story and we would have to wait for dusk to fall. Time for Jim to get the stepladder out and improvise as he attached the net curtains to our curtain rail with bulldog clips. The next problem was we have two sofas in the living room and the photograph called for me to be sitting in an armchair. Luckily, we have one in the dining room which Jim was able to manhandle into place. Then the room was too crowded - there was now a generator in one corner, and two large pieces of lighting equipment - the three-seater sofa was in the way! 'No problem,' said Jim, 'I'll stand it on end against the wall.' Chris must have seen my look of absolute horror as he hastily said that wouldn't be necessary. It was pushed to the end of the room, blocking the doorway, meaning it had to be moved each time Chris went in and out to his car for yet another piece of equipment. Did we have a table lamp? Yes, there was one in the bedroom. A small coffee table? Yes. Jim was kept busy and things were coming together. But the best was yet to come.

A blue flashing light - to represent the arrival of the police car - was to be set up outside the house as dusk fell. It was first balanced on top of Chris's car, but this was too far away to have an impact. Cue the stepladder again as Jim and Yvey positioned it on the path outside the window and placed the light on top. All this preparation had taken what seemed like, and probably was, hours. I can't imagine what the neighbours must have been thinking - our front door open, cables and wires snaking from various pieces of equipment outside the house into our hall and living room, and bright flashes from Chris's camera every couple of minutes as he tested the lighting for my 'pose'.

Eventually, the scene was set and I sat in my armchair for 'A Quiet Half Hour', reflecting on what I'd done, and ready to accept the consequences, Chris took dozens of photographs and at 7pm, it was 'a wrap'. Is that the correct terminology? We were all exhausted, I had a headache from the camera flashes, but I was 'buzzing'. At 75 years of age, I'd won a national writing competition and taken part in a photo shoot. My late parents and in-laws were subscribers to Reader's Digest and we've kept up the tradition, but none of us could have foreseen that one day I'd actually be featured within its covers.

When it was all over, the net curtains taken down and all the equipment packed away, Chris set off for his four-hour drive home. Yvey was catching the London train so we gave her a lift to our local station. It wasn't until she arrived home that she realised she'd left her personal camera in the back of our car. We sent it off to her by special delivery the next morning with Jim's comment, 'You could have left the net curtains behind!'

Thank you, all you lovely people at Reader's Digest; the judges who voted my story the winner, Laura, Sub-Editor, Yvey, Art Director, and photographer Chris. You gave me a day to remember - and the prize money funded a family history research trip to Santiago de Compostela. But that's another story...
www.readersdigest.co.uk
Posted by J Carmen Smith at 21:16