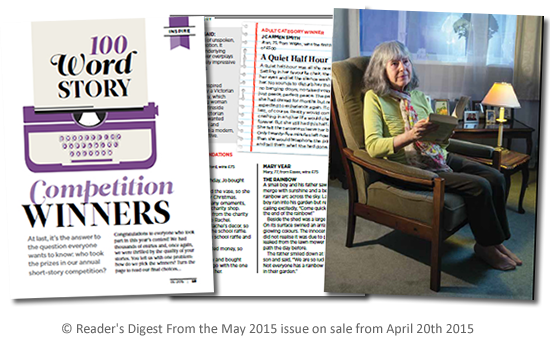 Sometimes – and it must be said that in later life this happens very rarely – you experience a period when exciting things happen – events which are so unexpected that you have to pinch yourself to prove you’re not dreaming! March this year was such a period for me; a month of exciting personal success.

The chain of events began in January, the deadline for the Reader’s Digest 100 Word Story Competition was fast approaching, should I enter? Since coming to writing late in life, I’ve always been intrigued by the idea of writing a story in just one hundred words. I’d used it as an exercise in my U3A creative writing group, finding it hard work but enjoying the challenge. This time, there was a story already in my head, begging to be written. The idea came from a Victorian painting by L C Henley called A Quiet Half Hour; but my imaginary ‘quiet half hour’ was very different to the cosy Victorian image depicted in the painting. Yes, I would take a chance and submit it as I knew there were a number of prizes, two runners up and a further story chosen each month throughout the year.

I’d had some success during 2014 when submitting articles for magazines, but this was a totally different challenge. For a magazine article, you can do the research, know exactly what type of article will appeal to a particular readership – and you usually have between 1,000 and 1,200 words to develop your piece of writing. Now I had just 100 words in which to bring the story to life.

Over the following weeks, I was mostly successful in putting the competition to the back of my mind. I expected the judging process to take some time and knew that due to the number of entries they would receive, I wouldn’t hear from them if my story wasn’t chosen. What happened next came as a complete surprise.

It was mid-February, I’d had a busy day and it was late evening before I had a chance to sit down, laptop on my knee, to check my emails. I was alone in the house; my other half was at Anfield watching an LFC mid-week home game. Only one email – but it was from Reader’s Digest! Before opening it, I stared at the subject line; ‘Re your 100 Word Story entry…’ Wow! I must be a runner-up… I clicked to open and read the first sentence:

Dear Joan, Many congratulations! After a long and difficult judging process, you’ve been declared the winner of this year’s 100-Word-Story Competition in the Adult Category and will receive the £500 first prize…

Anyone watching me over the next couple of minutes would have thought I was completely deranged. The laptop almost fell to the floor. I turned into a human windmill, arms flailing, as I jumped up and down, rushing from living room to hall, hall to dining room. At the same time, shouting, ‘Oh my God…Oh my God…’ And there was no-one to tell! I thought I would burst, unable to physically contain my excitement – was it too late to phone my sons, at least the two who live in this country? No, I felt justified at disturbing them; I knew they would be thrilled at the news, as Jim was when he returned home – after initially thinking my excitement was because Liverpool FC had won their match! 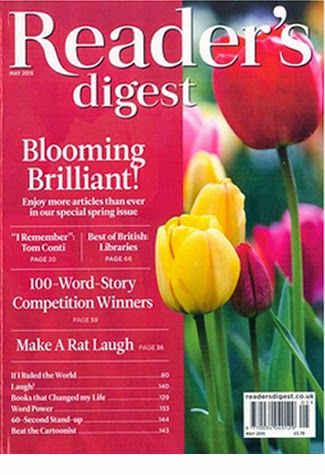 The following morning, after a sleepless night, I had calmed down enough to email Laura at the Reader’s Digest with the personal information she had requested. The wait until the story appeared in the May issue of the magazine would seem endless, but in the meantime there was more excitement to look forward to. Laura’s email had also said:

A photo shoot! It would be arranged for early March – but that’s another story…

My story is in the May issue of Reader's Digest, which is out now.
Posted by J Carmen Smith at 09:40