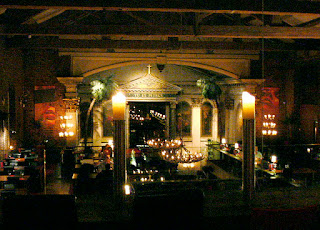 The Alma de Cuba is a restaurant and bar in Seel Street, Liverpool which has a personal significance for me. The building was formerly St Peter's Roman Catholic Church, and until its closure it was the oldest Catholic church in the city.

My Spanish grandparents attended the church at the beginning of the last century, and my mother was baptised there in 1908. 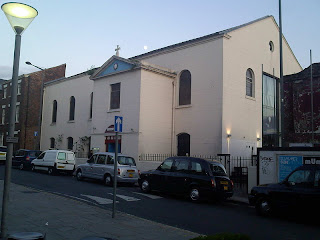 The Alma de Cuba has kept many of the church's original features. When I visited it for the first time, it was very emotional to stand where my grandparents had stood almost one hundred years earlier, holding their baby, my mother, in their arms. In fact, three generations of my family came together at the restaurant in 2008 to celebrate the centenary of my mother's baptism. By that time, I was a grandmother myself. Two years later, my husband and I celebrated our golden wedding anniversary with family and friends at the restaurant.

If you are ever in Liverpool, do pay a visit to the Alma de Cuba, there is nowhere else quite like it.
Posted by J Carmen Smith at 20:00