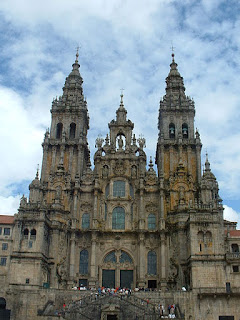 Santiago de Compostela in Galicia, northern Spain, is a city of pilgrimage for Roman Catholics, the main focal point being its cathedral, believed to house the tomb of St James. The cathedral has been rebuilt four times, its golden Baroque shell enclosing a medieval interior. The cathedral is set in Santiago's main square, the Praza do Obradoiro, in the heart of the old city. It is flanked on one side by the Hotel Reis Catolicos, originally a pilgrim's hostel built in the early 1500s, but now a luxurious parador. The praza is unusual in that it is not lined with restaurants, pavement cafes or souvenir shops but it is always thronged with people, groups of tourists who have been coached in from cruise ships anchored at Vigo; Spanish tourists flocking in from the bus station, a stone's throw from the cathedral; weary pilgrims, weighed down with backpacks, often wearing the traditional cloak, hat and staff and hurrying to climb the cathedral's magnificent Baroque steps and enter its Romanesque doorway, the Portico de la Gloria, or 'Gateway to Heaven in time for the midday service.

However, there is no shortage of restaurants, bars, taverns and opportunities for souvenir shopping in the smaller squares and narrow, granite paved streets of the historical centre. Places to sit and stare, to enjoy a tortilla and a glass of rioja, followed by a slice of traditional Santiago tarte, whilst marvelling at the architecture of the dozens of monasteries, convents, churches and museums. One great advantage of the city is that its historical heart is small enough to be explored on foot and has an intimate atmosphere which is vibrant without being frenetic.

Outside the old centre, Santiago is a city like many others, with department stores, commercial buildings, hotels, fountains and green spaces – and traffic. If you wish to travel further afield, hire a car and visit the seaside town of Sada or the bustling port of La Coruna, with its attractive glazed facades lining the Paseo Maritimo.
Posted by J Carmen Smith at 16:52