To Dye - or Not to Dye - That is the Question  (Apologies to The Bard!)

When I was a child I didn't know any women of the older generation who dyed their hair; you became middle-aged, you went grey, it was as simple as that. By the time I was a teenager in the '50s, young women were beginning to experiment with colour just for fun. I had friends who went 'plum' coloured and others who went blonde, but it was usually only a temporary phase. It was easier if you had 'mousy' hair - or to be kinder, hair of an indeterminate colour! On my father's side of the family there were women - and men - with glorious auburn hair which became in later life what was described as 'pepper and salt'. However, my mother was Spanish and I inherited her very dark hair - and I think the darker your hair colour, the earlier it will turn grey.

As a young child, my hair was very straight and was usually cut in a simple 'basin' cut by my mum. Oh how I envied my best friend, who had blonde, naturally curly hair!

As a teenager, I discovered the delights of home-perms. 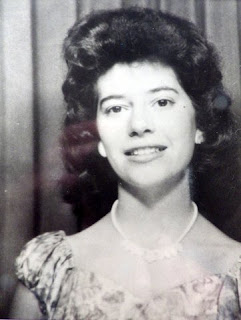 My hair grew very quickly and as a young married woman in the '60s, I regularly switched between long and short styles - never worrying about its colour. 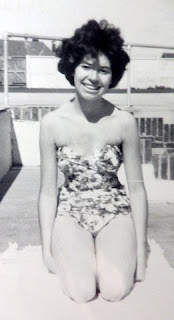 By the time I was expecting my first child, in 1966, my hair was long again.

The years pass, you're busy raising your family, you take the colour of your hair for granted, the image you see in the mirror, when you have time to look, is still familiar. Until change creeps up on you, one silver thread at a time. My first one appeared when I was in my thirties, a mother of three, blissfully unaware of the momentous change that was taking place - until a 'friend', standing behind me, gleefully pulled out a long silver hair from the back of my head! Even then, I didn't worry too much about it, I was in my fifties before the process began speeding up. Those were the days when you took holiday snaps on a roll of film that took a week or so to be developed before you could see the end result. And suddenly you don't recognise the woman smiling out at you - 'But I'm going grey', you wail. 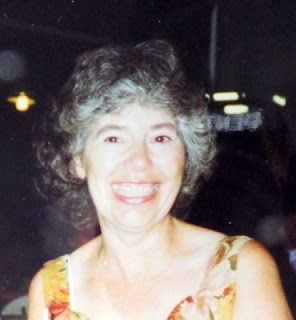 Decision time! A point that most women will reach at some time in their lives. Will we embrace the change in our natural hair colour, from brunette, auburn, or blonde to silver, or will we step on that treadmill of home-colouring or expensive visits to salons? And if we go down the colouring route how many years will it be before we say, 'enough is enough'?

Is it easier for blondes? Probably; I imagine silver can become ash-blonde quite easily, and look very attractive. But if you've always had very dark hair, it's more difficult. Black was out of the question, it just didn't look natural, so I began with 'mid-brown', going slightly lighter as my hair became more and more grey. But I never really liked it. I don't enjoy going to the hairdressers, I get my hair trimmed at home, so colouring was a DIY job. I'm sure home products are improving all the time, but I always dreaded it, the preparation - covering the bathroom floor with old towels (once I still managed to 'drip' onto a new stair-carpet) - and the timing, if I was going somewhere special in a couple of weeks time would my colour last, or would I end up with the dreaded 'badger streak'?

When I reached seventy, I was ready to give in, but my husband kept persuading me otherwise - even though his own hair was completely grey. Funny how on men it's considered distinguished - the 'silver fox' look - while on woman it's said to be 'ageing'! I persevered for another couple of years but I knew there was no way I was going to keep on past the age of seventy-five. Once the decision was made, it wasn't an easy transition. I had to watch the silver creep, inch by inch, from the crown to the ends - not a pretty sight! One word of advice - if you decide to take the plunge, do it in the winter when you can always wear a hat outdoors.

Once the last half-inch of coloured hair was snipped away (a 'semi-permanent' colour lasts much, much longer than the six weeks it's supposed to) the sense of relief and achievement was wonderful. There have been annoying moments, but fortunately I've been able to see the funny side of them. Booking into a hotel with my husband, we were asked if we would like an 'accessible' ground-floor room!
'No, we'd like one on the top floor please.'
'Well, we have got one on the top floor but I'm afraid there's no lift.'
'That's not a problem.' The hotel was only two storeys high!
'But the room is at the far end of the corridor.'
'Yes, yes, that's fine.'
We're now regulars at this particular hotel - it's where we stay when we're visiting family - so now they just smile and say, 'Room 208, as usual?' I also appreciate it when young people give up their seat for you on buses and trains, I certainly don't resent the gesture.

Of course, I miss the thick, heavy hair of my youth, the gloss, and the way the sunlight would highlight glints of chestnut; but I know it wouldn't suit the face I inhabit now, Mother Nature's taste is excellent when it comes to colour schemes - and all the family love my 'new look'. Although I'm a little sad when my grandchildren browse the old photograph albums and say, 'Gosh, Nanny, is that really you!'

According to Shakespeare, I have now reached the seventh age of  [wo]man - but although my 'crowning glory' is silver, and no longer glorious, I'm not yet 'sans teeth, sans eyes, sans taste, sans everything' - so, sorry, William, I'm not quite finished yet! 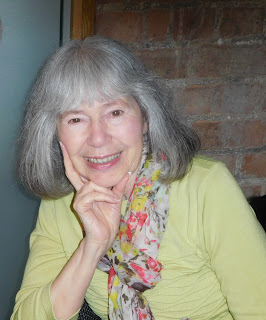 Thanks to my good friend, children's author Annie Holland, for my latest photograph. Annie's delightful 'Stella the Stork' tales are available from www.stellathestork.co.uk.

Email ThisBlogThis!Share to TwitterShare to FacebookShare to Pinterest
Labels: how will people react if I stop, On going grey, should I keep dyeing my grey hair