The closure of many public libraries is currently a contentious issue, widely discussed in the media, so what better time to visit the Victoria Gallery's exhibition 'Knowledge is Power' and discover the roots of Liverpool's own library services. The exhibition opened last November and runs until the 18th of June, 2016. On the Gallery's website, I read about the drop-in reading group sessions, Reading is Power, run by Richard every Wednesday at 1pm as part of the exhibition. These sessions were described as friendly, informal, and free, with no prior booking required, which meant I could attend as and when it was convenient for me, without having to make a long-term commitment. Its intention is to 'explore stories and poems by great writers', no prior reading required, another plus, although I did hope that I would be familiar with some of the works.

It was the Wednesday of Easter week before I had a chance to 'drop in' and the timing probably explains why only four of us, two men and two women, turned up that particular day. It also explains why Richard was unavailable, although we were lucky that Kate, one of the Visitor Services Team, stepped in to lead us, handing out photocopies of an extract from George Eliot's Silas Marner. We each read out a short section of the extract and then discussed it as a group. The reading aloud is voluntary. I can vouch for the description 'friendly and informal', as I spent a very enjoyable hour in the company of others who also love reading. Which brings me to the exhibition itself.

I arrived early and had time to look at the exhibits before the reading session began. The first thing to catch my eye was the quote from Jane Austen's Pride and Prejudice : 'I declare after all there is no enjoyment like reading! How much sooner one tires of anything than of a book!' This statement by Miss Bingley is a ploy to attract Mr D'Arcy's attention but is none the less true for many of us. There were very few books in my childhood home yet thanks to the local library, I became an avid reader at an early age. I wonder whether the character in Sheridan's, The Rivals (1775) reflected the playright's own view when he says, '...a circulating library in a town is an evergreen tree of diabolical knowledge! Had I 1,000 daughters, by heaven! I'd as soon have them taught the black art, as their alphabet!' The Public Libraries Act 1850 was introduced by Liverpool-born MP William Ewart and funded by taxpayers; without this free service my access to 'the tree of knowledge', diabolical or otherwise, would have been very limited.

There were 'public' libraries long before the 1850 Act, of course, but they were available only to privileged members of society, allowing them to pool resources and gain access to commercial and professional information. Liverpool's Athenaeum (1797) was a private members' club and in 1802 the 40 guineas fee to join, and therefore have access to its library, was prohibitive to all but the wealthiest men in the city.

Books from the Medical Library (1779) which individual members of the medical professional would not have been able to afford, gave valuable information on the symptoms and cures of diseases. Some of these books were on display in the exhibition, along with pieces of equipment such as a Georgian Resuscitation Kit - a rather gruesome contraption! 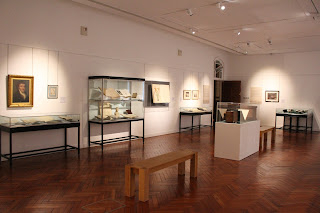 There were books on display that I would love to handle, my fingers itched to turn the pages of William Enfield's The History of Liverpool (1758). Almost 50 years later, The Strangers Guide to Liverpool described the city as '...one of the finest towns in the world; the abode of industry and of opulence; the home of commerce and magnificence', and William Roscoe believed it was 'the new Florence'. I knew a little about William Roscoe, the abolitionist, but I didn't know that he was 'one of the best-selling historians of his generation'. Both the draft copy and the final printed version (1805) of his Life of Pope Leo X are on display in the exhibition. They are huge tomes and he must have spent years handwriting that first draft; I wonder how many modern writers would have been up to the task.

There is a large Survey Map of Liverpool on one wall, dated 1836, and I was able to find Upper Frederick Street, where my mother grew up in the early years of the 20th century. There is also a hand-written census from 1801, the first to document the whole population of the city; it was interesting to see the mix of occupations in one street - a Turnkey (at the Bridewell), labourers, mariners, and even a doctor. 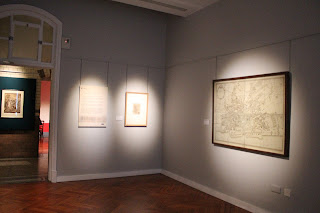 The Athenaeum and The Lyceum shaped the elite culture in Liverpool but it was interesting to read that Henry Gearing, the Athenaeum's first librarian was 'reprimanded for drinking spirits'. It seems he wasn't dismissed from the post, which he held from 1799 to 1817! During the  late Victorian era, the working class began to benefit from free libraries; access to knowledge was the means to self-education, and reading for pleasure a welcome relaxation. Richard Warbrick's English and Foreign Circulating Library on Lime Street held 6,000 titles - which could be borrowed for a day, a week, or a month. The annual subscription was £1.10s, or you could borrow novels, romances and plays for the cheaper rate of £1.00! Also, the Athenaeum began taking boxes from Mudie's Select Library Ltd - there is one of the original boxes on display in the exhibition.

The philanthropist, Andrew Carnegie became the main force behind the spread of the library service. Between 1883 and 1929 he donated funds for over 2,500 libraries, 660 of them in the UK and Ireland, with a dramatic increase from 1899 onwards. Many of us will have a Carnegie Library in our town - if it hasn't already been closed! He required each town to make some financial commitment towards the cost, believing that people would feel more involved in the service if they had some input. And, of course, Liverpool is indebted to Sir William Brown MP, who paid the entire cost of the Brown Library in 1860, now the Central Library in William Brown Street. Later, six branch libraries were funded by Andrew Carnegie. My local library, built in 1906, is a Grade II listed Carnegie building. Fortunately, after a public compaign and consultations with the Council, this has remained open, although with reduced hours; another Grade II listed library some five miles away has been converted into office space.

As readers, we have much to thank those early benefactors for. I think everyone who is interested in keeping our libraries open should visit the VGM's exhibition to appreciate how much effort went into opening up the world of books and knowledge to the wider population. The rise in the popularity of e-books does not mean we have to make a choice, the physical and the digital can co-exist happily. When travelling we can have an unlimited supply of reading material at our fingertips without the extra baggage charge! In whatever form,  'I declare after all there is no enjoyment like reading'!

When exploring the Victoria Gallery and Museum, a visit to the Waterhouse Café adds to the pleasure. Being surrounded by stunning architecture makes it a unique place to enjoy lunch, or one of their delicious cakes with a coffee. 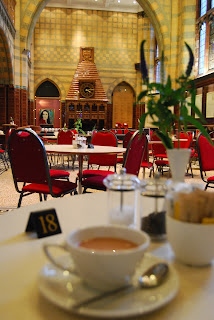 Photographs courtesy of The Victoria Gallery and Museum
Posted by J Carmen Smith at 22:42