A bus tour, the perfect way to get a taste of Liverpool’s heritage 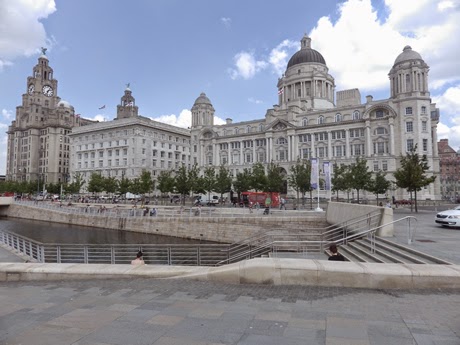 Sunday, 17th August was LFC’s first home game of the new season; it was an early kick-off and a perfect opportunity for me to spend some time in the city while my husband and son were at the match. Although brought up in the suburbs, I was born in the heart of the city, worked in the Castle Street/Water Street area until my marriage in 1960 and continued my education – as a very mature student – at The University of Liverpool, so despite the many changes over the years, I feel I know the city well. I’m a regular visitor to the Central Library, the Art Galleries and the Museums, so why did the idea of a City Explorer bus tour attract me? They are surely for tourists – aren’t they? But it’s easy to take familiar places for granted, and as I’ve often noticed these buses around town, open-topped and brightly painted in red and yellow, there was something appealing in the idea of experiencing the city as a tourist would see it.

There was a timetable outside the Central Library and I didn’t have long to wait before the bus arrived and I began my journey on “The BIG Yellow Bus Tour”. Sunday afternoon was extremely windy and I opted to sit downstairs. The guide introduced himself as ‘Paul,’ his disembodied voice floating down to me for the next 50 minutes as he remained on the upper deck throughout the trip. If you are new to the city the view from the upper deck would, of course, enhance the experience but as I already know the buildings themselves well, it was the commentary that interested me – and that was excellent.

This ‘Hop On – Hop Off’ tour stops, briefly, at 13 places of interest, and at four of these venues, the Albert Dock, the Pier Head, William Brown Street for the Museums, Gallery and Library, and Liverpool Cathedral you can buy tickets, but you can also buy tickets from the driver at any stop along the route.

This tour is perfect for tourists. If they have only half a day, they can save long walks, and therefore time and energy, by ‘hopping on’ and ‘hopping off’ the bus anywhere of particular interest to them, such as the city’s two Cathedrals, two Museums, and the iconic Three Graces. If they are lucky enough to have longer in the city, then the City Explorer ticket is valid for 24 hours, in fact during my trip the driver informed us that our tickets would be valid for two days!

As I’ve said, I thought I knew the city well – yet I was surprised at how many additional facts I picked up on this tour. As an avid Dickens fan, I knew that he visited Liverpool regularly, staying at the Adelphi Hotel and appearing at St George’s Hall, giving his Penny Readings – I was even lucky enough a couple of years ago to attend a re-enactment of one of these evenings organised by The Reader. Paul added a little colour to my knowledge by describing how, during his visits, Charles Dickens would walk up Brownlow Hill to visit the workhouse which explains the significance of the name of Oliver Twist’s benefactor – Mr Brownlow! And I didn’t know that Mark Twain, and the Roosevelts, had also stayed at the Adelphi.

I’ve walked past Wellington’s statue in William Brown Street countless times, without knowing that it was cast out of cannon from the Battle of Waterloo. I had a good view of Liverpool’s ‘gin palaces’, The Crown, The Vines and The Philharmonic – and learned that these magnificent public houses were built to actively encourage people to drink gin and beer as these were deemed healthier than the poisonous effects of the city’s water supply!

Facts and figures came thick and fast and Paul must be congratulated on his professional delivery.  I learned the origin of St John’s Gardens; how the world’s first Wet Dock at one time handled 40% of the world’s trade; that one of the Metropolitan Cathedral’s four bells is an original from the workhouse; that the area in front of Salthouse Dock is called ‘Nova Scotia’ because salt from Cheshire was sent from here to Canada, the ships returning with a cargo of wood.
Driving along Victoria Street, we were told that it was originally the home of mercantile insurers and commercial banks – one building still bears the name ‘Bank of Liverpool’ – and the city had its own currency!

I wouldn’t want to spoil the trip for future visitors by detailing the wealth of information Paul passed on – I hope that this little taster will encourage not just visitors, but people who, like me, think they know the city well, to either ‘Hop On and Hop Off’ or just stay on for the 50 minutes duration of the tour to listen to the excellent commentary. I’m trying to commit my pages of notes to memory so that on my next visit in a couple of weeks I will walk around the city with fresh eyes, saying to myself – ‘Oh yes, that’s where…’ or ‘Now I know why the bell tower of the Metropolitan Cathedral stands separate to the main building, it’s because…’

My thanks to Paul and to Chris, our driver who joined us at the Pier Head – I wasn’t able to get the name of the driver who took the first half of the tour, but thank him also.

Going for a coffee when I left the bus, I was amazed to see a zip wire running the length of Church Street! It was extremely high above the ground and it was very windy so I wasn’t surprised to see that there was no-one taking the opportunity to zip above the heads of the shoppers at a cost of £15. I’m sure it has been well utilised during the holiday period – and I was also delighted to see ‘Tickle the Ivories’ back in the city, these events add atmosphere to a city that is already buzzing!
Posted by J Carmen Smith at 16:28