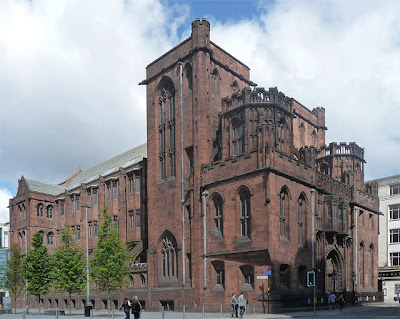 Saturday found us in what is probably my favourite spot in Manchester, The John Rylands Library, situated on Deansgate. This Grade 1 listed building, one of the best examples of Neo-Gothic architecture in Europe, was founded by Enriqueta Rylands in memory of her husband John. John Rylands came from humble beginnings but rose to become one of Manchester’s first multi-millionaires. The Library was designed by Basil Champneys in 1889, took ten years and £500,000 to build, and was opened to public readers on the First of January 1900. It is now part of the University of Manchester and houses Special Collections and Exhibitions and hosts Events and Tours and because of the collections it has acquired over the years is considered to be one of the finest libraries in the world. Public access to the building is free, and although visitors are now unable to handle any of its contents there are always interesting exhibits on display.

As well as enjoying wandering around this stunning architectural gem, my particular interest this weekend was a talk by Zoe Kinsley of Liverpool Hope University and author of Considering the Manuscript Travelogue: The Journals of Dorothy Richardson (1761-1801). The talk was entitled ‘Collection Encounter: The Travel Diaries of a Georgian Lady’. These travel diaries were written by an unmarried lady of leisure, Dorothy Richardson, who travelled around England with members of her intellectual and scholarly family over a period of four decades.

Richardson’s diaries were in manuscript, considered at the time to be less constraining than the printed form, yet they had all the characteristics of printed works; indices, appendices, even mileage charts. Richardson was also an accomplished artist, the entries being accompanied by fine drawings of buildings and landscapes. Even the bindings of the diaries were designed to give the appearance of printed books when placed on a bookshelf.

The 1700s was the era of early ‘industrial tourism’ and Richardson’s description of Bacup in Lancashire, known as the Vale of Famine, was rather less than flattering! She gives a minutely detailed description of hat-making when she visits a factory in Bent, Oldham, and was not averse to trying various techniques herself, not very successfully according to the diaries. One can’t help wondering what the factory workers thought of these visitors!

Although the small group of us who had booked places on the talk were unable to handle the diaries, it was good to see them out of storage and placed on a table in front of us. Assisted by John Hodgson, Zoe opened them at various entries and illustrations and we were able to view them closely, marvelling at the minute and meticulous handwriting. Presumably, Richardson made rough copies on site and wrote them up later.

In a modern, ground floor annex, The Rylands Library has a coffee shop/cafe with friendly staff, and you can also browse a small selection of interesting/unusual gifts or souvenirs.

If you’re in the area on the 13th or 29th of June, why not book to hear the talk on Florence Nightingale’s Notes on Nursing 1860, and ponder on what she would have thought of today’s NHS!
Posted by J Carmen Smith at 10:07