A chat with Janet MacLeod Trotter 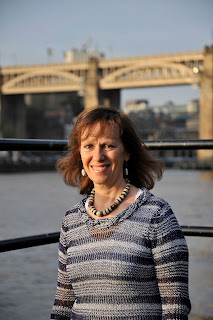 Today, I am talking to Janet MacLeod Trotter, successful author of family sagas and historical novels.

Janet, having just read, and very much enjoyed, No Greater Love, I see from your website that the ending has been changed from when it was originally published and I wonder what prompted this?
This was a new edition for the centenary of Emily Wilding Davison (the suffragette martyr who was trampled to death by King George V's horse at the Epsom Derby) who inspires my fictional heroine Maggie Beaton. As I was revisiting the story, I decided it would be interesting to take the action a little bit further than in the original, so it's more of an addition than a complete change. Also my daughter has always wanted a different outcome, so it was partly to please her!

I found some passages very disturbing. Given what the suffragettes went through to gain women the vote, what do you think about the low turnout of voters for local and general elections?
It upsets me when women don't exercise their right to vote. Three of my own great-aunts and my great grandmother (also called Janet) were very actively involved in the campaign for the vote, and I'm humbled and proud that they marched, sold newspapers and took part in civil disobedience to achieve emancipation. If they were prepared to risk their liberty and careers, then turning up at the polling station is the least we modern women can do. 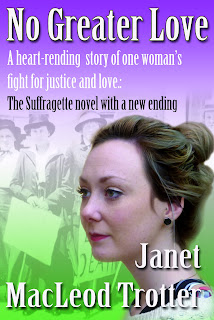 What is it about the period this book is set in that you find particularly interesting?
I find the Edwardian era fascinating. Coming on the heels of the Victorians, changes were happening for some women such as greater education, travel and careers, yet they were still having to battle the constraints of class and strict social conventions. Then comes the world-shattering experience of the First World War, which throws both men and women's lives into turmoil – grist to the mill for a writer!

How much historical research do you have to do, and how do you go about it?
A lot! I spend several months reading and researching a topic or an era that intrigues me – for example suffragettes or Italians living in Britain through the Second World War – and from this the ideas for the plot and characters grow.

Is there a period you haven’t yet visited in your novels but would like to tackle?
I would love to do a novel based on the Scottish heroine Flora MacDonald, which would take me to 18th century Scotland and also America. My MacLeod ancestors were living on the Isle of Skye when Flora was helping Bonnie Prince Charlie escape after the Jacobite Rising, so perhaps one or two of them could sneak into the novel!

In your own reading, is historical fiction your favourite genre, or are there others?
When I was a teenager, historical novels were my favourite, but I'm happy to read a whole range of different novels – contemporary, mystery, foreign novels – and I also enjoy non fiction, especially travel. I'm in two reading groups, so am often introduced to novels that I wouldn't have tried otherwise.

What real life characters have interested or inspired you?
Well I have to say Emily Davison, don't I?! I might not have her courage but she certainly inspired me to write No Greater Love. My Jarrow Trilogy is inspired by the life of Catherine Cookson – she was such a complex and interesting person who rose from her impoverished background to be a great observer and writer about the people of North East England. Another Edwardian!

I was interested to learn that you use photographs of women from your own family for your book covers, what prompted you to do this?
Because they are such interesting women! I re-branded my historical novels when they were published as ebooks and wanted strong images of real women on the covers, so I raided the family archive. My mother was an actress in her younger days and so I've used her lovely photos on more than one cover – it's just a pity she never lived to see her latter day fame.

Have the real lives of these women influenced characters or events in your books?
Not specifically, but the novel I'm researching now is set largely in India and the background is based on my grandparents experience there in the 1920s and 30s, expressed through old diaries and letters from my grandmother to her parents back in Edinburgh.

You have had incredible success with your e-books. How did the journey start – and did you have any idea in the beginning of how popular your novels would prove to be?
I've been writing for many years and published originally by a traditional publisher. But the ebooks I have done myself and it's such a thrill that my novels are being enjoyed by a whole new generation of readers all over the world. The most satisfying thing is receiving emails from readers and hearing their stories. People like to relate to the women in the novels and many have said how the stories bring the past alive for them.

How much of the publishing process for your own novels are you involved in, for example, design, formatting and marketing.
I'm very involved but do bring in professional help with graphic design, ebook conversion, copy editing and newsletter production. My husband is also a co-director of the publishing company and helps with business strategy and marketing. It's a family business – our daughter and son have honed their proof-reading and researching skills – and my daughter appears on two of the covers!

Many thanks, Janet, for taking take time out from what must be a very busy schedule to talk to me. One last question: is the surname ‘Trotter’ particularly associated with the North East, I’m thinking of Catherine Cookson’s ‘Tilly Trotter’?
The name Trotter is a Scottish Border name – one of the wild Reiver clans who rampaged around the Scotland-England border for centuries – so it's not surprising that some Trotters  ended up in the North East and that Cookson should choose the name for her character. I was born a MacLeod (of Viking descent) and acquired a Trotter on marriage – so our children have inherited some feisty genes!