How much of Liverpool can you see in four and a half hours? 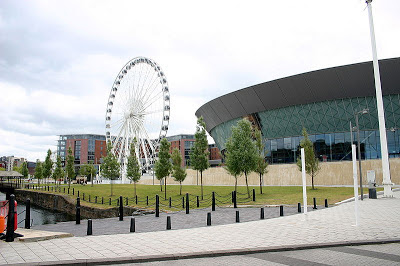 Not enough! Nevertheless, on Sunday 5th May, that was all the time I and my visiting grandchildren, aged 9 and 7, had while the rest of the family were at the Liverpool v Everton game.

It wasn’t the first time the girls had visited the city and they were looking forward to riding on the Echo wheel again so we worked our way down to the Albert Dock from Lime Street Station.

First stop, St George’s Hall, no time to go inside unfortunately, but the girls are now old enough to appreciate the splendour of the exterior and to marvel at the statues of Queen Victoria and Prince Albert on horseback. From there, we crossed to the statue of Wellington, the girls full of questions as to how it had been possible to place him on top of such a dizzyingly high column – unfortunately, I didn’t have the answers, but I intend to find out! On a beautiful hot day we were glad of the cooling spray as we passed the Victorian fountain on our way to the Walker Art Gallery and glancing up we were surprised and delighted to see all the coloured pigeons on the roof and the window ledges! Lambananas, penguins, and now pigeons – what next?

Time for a refreshing drink and cake in the cafe before showing the girls one of my favourite paintings, Fantine, and viewing the new exhibition – bales of waste – I found it impossible to explain the concept behind it to children, mainly because I don’t understand it myself!

Walking past the Central Library, I was mentally re-organising my diary to make sure I’m free and in town for the re-opening on 17th May.

Another all too brief visit, this time to the World Museum, where I was pleased to see that the pirate ship was still on display – I’d expected it to be removed on 21st April; the girls were very interested having seen the film last year. We just had time to visit a number of the exhibitions on the second floor – a taster session before our next visit – before we started on the long, hot walk to the Albert Dock and ‘The Wheel’! We timed it just right, no waiting, no queue and we were soon rising slowly above the Echo Arena enjoying the views along the river from one side of the carriage and the majestic Anglican Cathedral from the other. Four circuits later we were reluctant to come back down to earth.

Just time for tea in Jury’s Inn before we were met by the returning – disappointed – LFC fans, the girls were on their way back South and I was on my way home.