Transported Back in Time 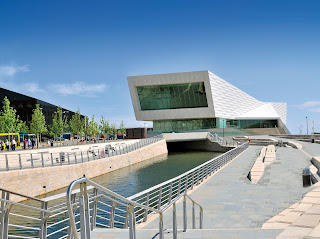 This weekend, I spent a couple of hours in The Museum of Liverpool viewing the Liverpool Overhead Railway (LOR) exhibition. The centrepiece of the exhibition is a beautifully restored carriage – all that remains of Liverpool’s elevated railway, the first in the world. The LOR was opened in 1893 to service the docks and its carriages were divided into three, a First Class compartment being sandwiched between two Third Class.


In the exhibition, two of the compartments are ‘peopled’ with lifesize-models; so realistic that I did a ‘double-take’ when I first saw them. Visitors to the museum have access to one of the Third Class compartments and it was while sitting in this that I was transported back to my schooldays.

I attended Childwall Valley High School for Girls (1950-54) and the school was divided into four ‘Houses’ – Gladstone, Langton, Huskisson and Sandon, the names of four of the docks along the railway. We wore small, coloured badges on our uniform – blue, green, yellow or red – to denote which House we belonged to. I’m embarrassed to admit that after all these years I can’t remember which was which, perhaps someone out there remembers? Worse still, I can’t remember which House I was in!

I do remember being taken on the 13-mile LOR round trip with the school. As schoolchildren, we all knew who Mr Gladstone and Mr Huskisson were, but I never knew if the other two docks were also named after prominent gentlemen. Today was an opportunity to find out. Thanks to the very helpful Maria and Tom at the museum’s information desk, I now know that Mr Langton was a member of the Dock Commission and a former Chairman of the Bank of Liverpool. Sandon Dock was named after Sandon Half-Tide Dock, but unfortunately I still don’t know whether there was a Mr Sandon.

The LOR wasn’t just used for workers and school trips, it was a popular day out for families at weekends – you could even get a special ticket for your dog.

The overhead railway was affectionately known as The Dockers’ Umbrella since walking beneath its elevated track gave protection from the weather. A less congenial nickname was The Pneumonia Express as the windows of the carriages were open in all weathers to disperse the smoke and the smell of the workmen’s clothes. Sitting in the carriage today I also spotted a sign that I remember being displayed on all forms of public transport in my childhood – ‘Spitting Prohibited’.

Due to the prohibitive cost of repairs necessary to keep the LOR running safely, it was closed on 30th December 1956 and demolished in September 1957. At the time, I was working in an office nearby and I can remember the general feeling of regret that such an integral part of the city scene was vanishing. It was also in 1957 that the city lost its trams – the first street tramway in Europe had opened in Birkenhead in 1860 – I still have my ticket from Liverpool’s last tram journey.

If you want to be transported back to the 1920s when in Liverpool, you should call in at the Sapphire Lounge in Bold Street; comfortable armchairs, attractive lighting and décor – and a ‘flapper’ to serve you coffee and cake in the afternoon! Take a trip downstairs and you’ll discover a secret; a door disguised as a bookcase leads you to Dillinger’s speakeasy where in the evenings cocktails are served in china cups – or so I’ve been told! Check it out on www.sapphirelounge.co.uk.
Posted by J Carmen Smith at 18:51