A chat with Philip Whiteland author of Crutches for Ducks 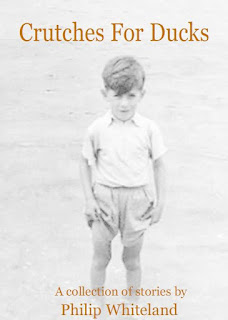 Philip Whiteland is a university lecturer and writer, and author of Steady Past Your Granny's and Crutches for Ducks.

What inspired you to write Steady Past Your Granny's and Crutches for Ducks?
I’m not sure that I was exactly inspired as such.  What started it all off was when our local Ottakar’s (as it was then) ran a competition for articles about Burton’s past.  All of the articles were to appear in a book and there would be a prize for the best article.  I wrote “The Wreck” for this.  It didn’t win but it did engender some interest, and I went on to have further articles published in Times Gone By, a local nostalgia quarterly magazine (now defunct).  When the Daily Mail ran an offer to Print Your Own Book in 2005, I gathered all of my articles to date together, wrote a few new ones, and had 20 copies of Steady Past Your Granny’s printed.  This prompted me to publish a print edition of my own, which did ok, and this eventually led to the Kindle edition which has done far better than I could ever have expected.  Crutches for Ducks is the next collection of everything I’ve written in the meantime, and there’ll be a new collection out soon called A Kick at the Pantry Door.

Can you give us an example of the nostalgic observations in your books?
I like to think that it’s not just nostalgia, which can get pretty wearing, but a combination of nostalgia and comedy that I’ve termed ‘nostagedy’ because ‘comalgia’ sounds like an unfortunate medical condition.  I’ve written about ballroom dancing at school (to be avoided), my trials and tribulations with woodworking classes, getting drunk as an adolescent and disgracing myself at Christmas dinner...by and large, it’s about recalling embarrassing incidents from the past and reliving them in the hope that others will nod and think “Yes, I remember that feeling”.  It seems to work Winking smile

What reactions do you get from readers about your collections and their own memories and nostalgia?
You would have to look at the very kind reviews I’ve received.  For example, I’ve had “The author shares his memories,but in doing so,magically draws you into his tales.” and “wonderful trip back to a happy time. very funny and honest. i clearly remember the slot meters and tellies. i also recall how cosy i was with my dad's overcoat on my bed in the winter and frost on the inside of windows each morning. we were healthy, hardy, loved and very happy.” amongst many others.  I’m just pleased that my stories ring a bell with people.  It’s quite comforting to know that it isn’t just me!

Could you tell us something about your first full-length work?
Ah, you’re referring here to my one foray into humorous fiction, ‘Jambalaya’.  The story behind this is that I wrote it in 1999/2000 (which seems like a lifetime ago now), after I was made redundant from a job I’d held for 20 years.  As it was my first ever experience of being ‘between jobs’ in my working life, I decided to take the opportunity to ‘write that book I’ve always been meaning to write’ – by the way, I do not advise anyone to do this, get your next job first!  Anyway, ‘Jambalaya’ is the result.  I would probably write it in a somewhat different style if I was to revisit it now, but I still think it has some worth and some pretty funny scenes.  I had put it away in a drawer and forgotten about it, but I put an extract on my blog just out of curiosity and it was very well received, so I decided to give it a chance as a Kindle edition.  Unfortunately, it got pretty well savaged by a reviewer within a few days of publication, and has never recovered since.  I’m not sure what its future is, but we’ll see.

Do you have a favourite literary character?
There are many, but I guess my current favourite would be Commander Sam Vimes from Terry Pratchett’s Discworld series.  He’s very human, moral (in his own terms) and devoted to his wife and young son.

Is there a book by another author that you wish you had written?
Again, anything by Terry Pratchett.  I’ve been reading some of his short stories across his whole career, and it’s depressing to note that he was a far better writer at 17 than I am now!

What is the first book you remember reading?
Probably something by Enid Blyton.  I was addicted to her Famous Five and Secret Seven stories.  The ones that I remember being engrossed in at Junior School were the Sherlock Holmes stories.

What are you currently reading?
Oddly enough, the Complete Sherlock Holmes stories!  Wonderfully written and you can see where all the CSI etc stuff first started.

If you could only take one book with you on a desert island, which would it be?
The P..P..Penguin Patrick Campbell.  It reduced me to tears of laughter the first time I read it, and still does now.

Who would be at your dream dinner party (living or dead)?
Oh gosh!  It would be quite a crowd.  Starting with the writers, I would like Terry Pratchett, of course, Alan Coren and his daughter Victoria, Keith Waterhouse, Groucho Marx and Spike Milligan.  Also both Ronnies and Morecambe and Wise and, from the current crop of comedians, Miranda Hart, Milton Jones and Tim Vine.  I’m sure there are loads I’ve not thought of, but that would be quite a fun crowd, I think.

Email ThisBlogThis!Share to TwitterShare to FacebookShare to Pinterest
Labels: Crutches for Ducks, News and guests, Philip Whiteland, Steady Past Your Granny's