It is twenty years since Dirk Bogarde died, on 8th May 1999. I had been a 'fan' since I was 15 years old, although I believe he would have hated the word 'fan'. I was out of the country the day he died; I was drinking champagne in France, celebrating my approaching 60th birthday. Quite fitting, since Bogarde's happiest years had been spent living in France, and the afternoon before his death in London he had also been drinking champagne in the company of Lauren Bacall.

Dirk Bogarde was born Derek Van den Bogaerde on 28th March 1921. His father was a journalist and his mother had been an actress, until she had to choose between her career or marriage and motherhood. The first film of his that I remember going to see was Doctor in the House, made in 1954. He was then 33 - although he looked much younger - and his dark good looks made him the darling of the box office throughout the series of Doctor movies. Like many young girls in the 1950s I used to write to fan clubs for autographed photographs of my favourite film stars; we also waited outside the stage doors of theatres until the popular singers of the day made an appearance and signed autograph books, or handed out signed photos. This was, of course, in the pre-Beatle era of huge crowds of screaming teenage girls. Over a couple of years, I acquired a number of these autographed photographs, including Margaret Lockwood; Jean Simmons; one signed To Joan by Lonnie Donnegan, whom I met in a record shop in Dale Street, Liverpool; and one signed by David Whitfield when he appeared at the Liverpool Empire in The Red Shadow - he also kissed my hand! But my favourite was always the one of Dirk. I've kept these photos in a large envelope for over 60 years, it's somewhere in our loft and now we've begun the task of de-cluttering the house we've lived in for 57 years, I'm hoping it will emerge some time soon!

One of Dirk's early films that I have good reason to remember was A Tale of Two Cities (1958). I saw it on a first date with the boy I later married. The opening shot showed Bogarde as Sidney Carton, slumped in a coach, white with exhaustion, on his way to the guillotine - sacrificing his life for love of a woman. By this time in his career I was so besotted that I couldn't help a small, quiet scream escaping. Even after all these years, my husband swears that my scream was neither small, nor quiet, and our first date was almost our last!

It is clear from Dirk Bogarde's autobiographies that although those early Doctor films were huge box office successes, he did not find them fulfilling. He believed that films should "Disturb, educate, illuminate" and he began to turn down 'commercial' films which he felt would compromise this belief. The films which followed, among which were Doctor's Dilemma in 1958 (which audiences were startled to find was not another in the Doctor series), Victim (1961), The Servant (1963) and Death in Venice (1970), became, in Bogarde's own words "...by and large, critical successes but box office failures".

Throughout his career in film and on the stage, Bogarde's manager and constant companion was Anthony Forwood. When they first met, just before World War II, Forwood was married to Glynis Johns and they had a young son, Gareth. Following their divorce, Forwood and Johns remained close friends and Forwood was to live with Bogarde in England, Italy and France, enjoying what Bogarde described as "a fifty-year-old friendship", until Forwood's death in their London home in the 1980s. By this time, Bogarde had given up on the film industry and he had spent most of his time in France, writing. I came to appreciate his writing, as earlier I had come to appreciate his change of direction in film. Simple phrases such as "Toothbrushes huddled in a tumbler like old men at a wedding" and "...she used words as if they cost her money..." delighted me.

Although Bogarde's autobiographical writings told of early romances - falling in and out of love at the drop of a hat; being head over heels in love with the film star Capucine when he was 38 and living with Forwood - John Coldstream, in his official biography of Bogarde, quoted Sheila Attenborough as saying "Dirk imagined his life". At 15 I knew nothing of the ambiguity surrounding Bogarde's sexuality and anyway, my day-dreams didn't go any further than wanting to meet him in person, to admire those dark, brooding good looks close up rather than on the screen.

In the early 1990s, I fulfilled that lifetime's ambition. For a couple of years, Bogarde had been on the theatre circuit with a one-man show in which he talked to his audience about his career in film and his life as a writer, and I saw him at The Royal Exchange in Manchester. He was a witty, slightly acerbic speaker who, quite rightly, refused to be drawn on matters concerning his private life, although he did mention that many of his female fans sent him gifts of ties - which he found quite puzzling! At the end of the talk he was signing copies of his books. I stood in line, hands trembling, a knot of excitement in my stomach. After all those years of day-dreaming about meeting him, I was about to shake his hand. When my opportunity came to speak to him, I told him I was a mature student studying for a BA(Hons), my next module covered Autobiography and I asked if I could write to him. He was charming, said "Yes, of course", and wished me luck as he signed my copy of A Postilion Struck by Lightning. 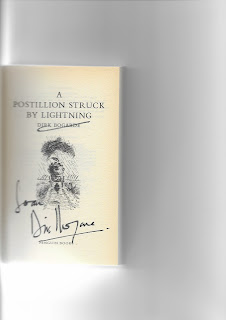 I never did write to him, I suppose I was afraid he was just being polite and there was no chance of his replying. Having since read Ever, Dirk - The Bogarde Letters, (Edited by John Coldstream) I realise that he was an inveterate letter-writer. His letters are a fascinating read, with no regard for spelling or grammar, acerbic, often very un-politically correct, but showing great love and loyalty towards family and friends. Had I written to him, I may just have had another letter to add to the book. 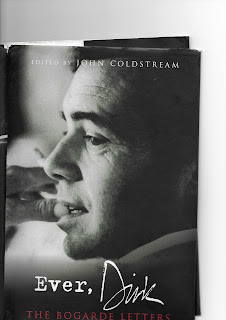 Looking back, I have mixed feelings about meeting the man I'd idolised for most of my life. Should I have left the theatre directly after the talk? I was now past middle-age and I shook hands, not with the dashing, handsome film star of my youth, but with a small, elderly man of 72. Perhaps some dreams are better left unfulfilled. However, there is still enough of the 'fan' in me to make me an avid reader of such books as John Coldstream's excellent authorised biography.

Bogarde's own letters, Ever, Dirk, edited by Coldstream, chronicle all the highs and lows of his and Forwood's life in France, their enforced return to London where Forwood died from cancer and Parkinson's disease, and Bogarde's own spiralling health problems.

Coldstream's biography gives a fascinating insight into the life of this very complex man, beginning with a description of how Dirk's mother turned up at the nursing home where she was to give birth, "her lipstick smudged, her hat askew and a perceptible whiff of alcohol on her breath"! So, yes, on balance I wish I'd taken the chance of corresponding with Bogarde about his autobiographical writings, and perhaps had the opportunity to discover more about the enigma that was Dirk Bogarde the man, rather than day-dream about Dirk Bogarde the film star. 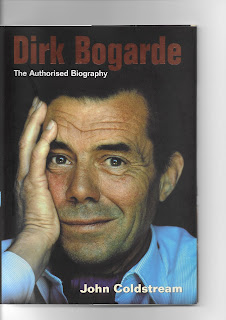