In celebration of National Short Story Week, 2015, I hope you enjoy my short story.

Beryl put her paperback away and glanced around at the other occupants of the station waiting room. Her fellow travellers were two middle-aged couples - the women looked like sisters - and an elderly man, who seemed immersed in his newspaper. She shifted on the hard seat. The numbness that had begun in her feet about half-an-hour earlier as she waited for her connecting train, had now travelled up through her legs and she wondered whether, if a train eventually did arrive, she would be able to get up.
The elderly man glanced up briefly, nodded his head, and said, 'Jolly bad show this, isn't it?' The other travellers didn't respond, but she smiled, noncommittally. Jolly bad show? Where did he think he was - in a scene from Brief Encounter?
He folded his newspaper, placing it neatly on the seat beside him, and leaned forward. 'I noticed you earlier, on the last train. I was going to sit next to you but the train was so crowded I had to make do with a seat further down the carriage.'
'Just as well; I wouldn't have been in the mood for conversation. I had a book I wanted to finish.'
'But you've finished it now. You've just put it in your bag.' So he hadn't been as immersed in his newspaper as she'd thought!
'Going anywhere special?' he continued. The other two woman had stopped chatting and were trying to look as if they weren't listening in to the conversation.
'A family party.'
'Me too, or at least I was until this fog came down. There doesn't seem to be anyone about to ask for information.' He glanced around the waiting room. 'We must be the only ones waiting for a connection.'
Beryl nodded in agreement. 'I'm on my way to visit my grandchildren,' she volunteered. I don't see them all that often; their parents are very busy and I find this journey a bit daunting in the winter. But I couldn't miss this weekend; the whole family is getting together for Sunday lunch. It's going to be really hectic.'
'That's a coincidence, that's exactly what I'm heading for this weekend too, a family get-together - or it was. What do you think are chances are of making it?'
Before Beryl could answer, the waiting room door opened and a railway employee popped his head in. 'Sincere apologies, ladies and gentlemen, we've just had word that there are no more trains leaving from this station tonight, the fog's too bad. I'm afraid I'll have to ask you to leave so I can lock up. We should have closed hours ago, that's why the heating's gone off and the coffee kiosk is shut.'
Beryl stood up stiffly. 'Are there any hotels nearby?'
'Yes, madam, there's one just across the road. You can't miss it, even in this fog; it's called the Railway Hotel.'
The elderly gentleman laughed. 'Reminds me of a song, something like, And all I could find was the Railway Hotel! Here, let me carry your case,' he said, turning to Beryl. 'It's the same size as mine and I can easily manage both of them. By the way, my name's Ken.'
'And mine's Beryl,' she replied. 'So you'll be going across to the hotel too?'
'Looks as though I've no option, even the taxi drivers have given up and gone home, and I'm not going to drag my son all this way out to pick me up - not in this weather. You don't mind do you?'
'Mind? No, of course not. Why should I mind? I just hope they've got rooms.' 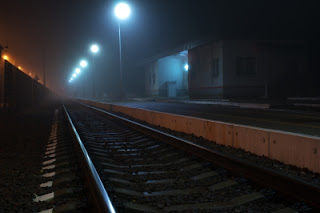 They ventured out into the foggy night, crossing the road with care, although there was no traffic about, and entered the warm and brightly-lit hotel foyer; closely followed by the two middle-aged couples, who were obviously still eavesdropping on their conversation.
'This is more like it,' Ken said, putting down the cases. 'I'll check if they have any rooms then we could have a stiff drink. Or do you need something to eat?'
'A drink sounds fine to me. I had a snack on the train.'
'Me too.' Ken walked briskly to the reception desk. Beryl waited just inside the doorway, smiling as the two women glared at her. She looked over to Ken and thought how distinguished he looked; that silver hair and neatly clipped mustache. He carried himself well, and she liked to see a man in a suit. Too many men slopped around in so-called 'sports gear' nowadays, although they often looked as if the only exercise they took was a walk to the pub, or the chip shop.
The receptionist was a young, pretty blonde. Beryl worried how the girl would get home when her shift ended, then comforted herself by surmising that there was staff accommodation on the premises.
'Yes, sir, you're in luck, we have a number of vacant rooms tonight; cancellations due to the fog. Will that be a single, sir?'
After glancing across to Beryl, who had begun quietly humming, Strangers in the Night, Ken turned back to the receptionist. 'No, a double please. King-sized bed if you have one, and if it's a four-poster that's even better. In the name of Smith, Mr and Mrs Smith, and I'll pay in cash.'
Five minutes later, they were in the best room in the hotel, door locked, giggling like a pair of teenagers. Beryl sat on the edge of the bed and kicked off her shoes.
'Ken! You are awful. Did you see the reaction of those two couples? They were so obviously shocked, staring at us quite openly! Will you ever grow up and stop playing games?'
'Why should I, pet? Anyway, you're just as bad, and it adds a bit of spice to life. Let's give the kids a quick ring to tell them we won't be there till tomorrow. Then open that mini-bar!'


Image courtesy of radnatt at FreeDigitalPhotos.net
Posted by J Carmen Smith at 07:54